This article is about the Able Sisters store. For information on the individual characters, please see their individual pages: Mabel, Sable, and Label.

Able Sisters is a clothing shop/tailor shop, one of the main stores in the Animal Crossing series. It is owned and run by Sable and Mabel, the Able sisters. The store was owned and run by their parents, until a fatal sewing accident led to the business being handed over to Sable, who also had to take care of her younger sister, Mabel.

In all of the games except for New Leaf, the store resembles a small cottage. Some feature an attic space or side room which may be the sisters' living area. It has an emerald green roof, with blue featured windows with white shutters. The store also has a large white door for the entrance, with the Able Sisters sign directly above it.

In New Leaf, the store is much larger with an external stairway leading up to the top floor which eventually becomes Shampoodle, where the player can change their hairstyle. It retains the blue sign above the door, but no longer resembles a cottage.

In New Horizons, the store must be built and can be placed anywhere on the island. The exterior of the shop has a display window showcasing what they're selling.

In the original Animal Crossing, it is always placed in one of the F acres, except for acre F5 where the dock is located.

In Wild World, it is always placed directly east of Nook's shop. On the game cover they are in separate places though.

In City Folk, it can be found anywhere in the Town.

In New Leaf, the store can be found in the Main Street. Upon starting the game it is next to Nookling Junction to the left of it, and the Museum or the bench to the right. However, once the player has met certain requirements, the Gardening Store will be built between the Nookling store and the Able Sisters store.

Initially, the only items Mabel and Sable offer in their store is shirts and designs, as well as skirts and pants which are new to the series. These take the place of accessories, which used to be on show in the top right of the store.

Labelle runs the accessories store which is accessed via the door on the right of the building. It can also be accessed through Mabel and Sable's section by going through from the right of their room.

Once the player has spent 8,000 Bells in the Able Sisters store, Kicks' store will open next door to the right of the building. It will offer shoes as well as other accessories, such as socks.

When the player spends at least 10,000 Bells between the Able Sisters or Kicks, the beauty salon Shampoodle will open directly above Able Sisters.

In New Horizons, the Able Sisters shop initially is not present on the Deserted Island and must be built. After Nook's Cranny is built, the player will encounter Timmy and Tommy speaking with Mabel about selling her wares on the island. From then on, Mabel will appear in the Resident Services plaza at least once per week and sell a small selection of clothing. If the player purchases at least 5,000 bells worth of clothing throughout two or more of her visits, then on Mabel's next visit, she will reveal that she and Sable have decided to open a shop on the island and ask the player to choose its location. The player can place the plot for the shop, which is 5x4 tiles anywhere on the island they see fit. The shop will open two days after the plot is placed.

The completed shop sells a wide selection of tops, bottoms, dresses, headwear, accessories, socks, and shoes. Most of the items on display change each day, but two mannequins on the left of the floor are adorned with seasonal items that change less frequently. There is also a much larger selection of items that can only be viewed in the dressing room, a new addition to the shop which allows the player to both try on and buy multiple articles of clothing at once. Purchased clothing can either be worn out of the shop or shipped to the player's House storage.

After opening the shop, Label and Kicks will begin appearing in the Resident Services plaza as special visitors. Label will perform fashion checks, while Kicks offers shoes and backpacks.

Unlike Nook's Cranny, the shop will not kick the player out when the time hits 9PM.

Clothes and accessories can be tried on before they are bought by interacting with the item, and from there Mabel or Labelle will reply with a list of options - trying on being one of them.

Designs are created by talking to Mabel. Designs are player-created patterns that allow the player to create customizable objects that best suit their needs. They can be used as clothing, headgear, umbrellas, paintings, wallpaper, flooring or used as tiles to place outside on the ground.

A PRO design is a more advanced design the player can make in City Folk, New Leaf, and New Horizons which costs 350 Bells, 500 Bells, and 800 Miles respectively. Unlike regular designs, which have the pattern on the reverse and obverse on clothing, the player can customize the front, back, and each sleeve individually. PRO designs take up one pattern slot, and, like normal patterns, can be displayed and used through the Able Sisters store.

Once the player has spoken to Sable on ten separate days (at least once per day), a new sewing machine will appear in the shop. This machine will allow the player to scan and create QR codes.

Creating a QR code will generate an image that contains the pattern's name, a preview image, and the QR code. The image will then be exported to the SD card and will be accessible via the Camera Software. Exported Pro Designs may require more data than a single QR code can contain, and up to four QR codes will be generated for one design that has to be scanned in sequence to reproduce the pattern. Players can share QR codes by uploading them to a website via the 3DS's Web Browser, or by inserting the SD card into a PC and extracting the QR code from there.

Scanning a QR code is straightforward and requires a current pattern to be overwritten in order to save it. Once a pattern is chosen for overwriting, simply point the 3DS's camera at the QR code and align the crosshairs to match up with the code. If a multi-code Pro Design is scanned, the game will detect it and prompt the player to scan the subsequent codes. Regular and Pro Designs scanned via QR code cannot be edited or shared in-game (e.g., with villagers via the pattern displays, or other players). If a QR code is difficult to scan, adjusting the brightness around the code may increase chances of success.

In New Horizons, the Able Sisters shop has a Custom Designs Kiosk in the back. When the player first uses this kiosk, they are assigned a creator code, which can be shared and used by other players find all of the code owner's designs. Individual designs are also assigned a unique code. Using this feature requires an active Nintendo Online Subscription. 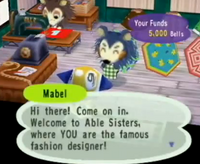 Mabel welcoming the player into the Able Sister's shop in Animal Crossing. 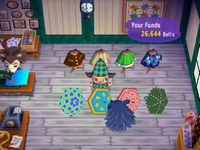 The Interior of the Able Sisters in Animal Crossing.

The Able Sisters building in Wild World and City Folk.

The interior of Able Sisters, as shown in Wild World and City Folk with Mabel and Sable. 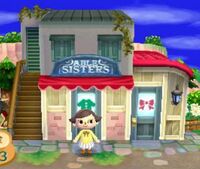 The interior of Able Sisters in New Leaf

The pictures found hanging in the shops in New Leaf.

The Able Sisters shop near the start line on the Animal Crossing course in Mario Kart 8.

Mabel greeting the player into the Able Sister's Shop in New Horizons. 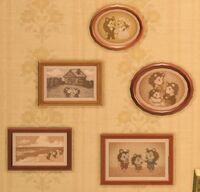 The pictures found hanging in Able Sisters in New Horizons.
Add a photo to this gallery
Retrieved from "https://animalcrossing.fandom.com/wiki/Able_Sisters?oldid=458138"
Community content is available under CC-BY-SA unless otherwise noted.