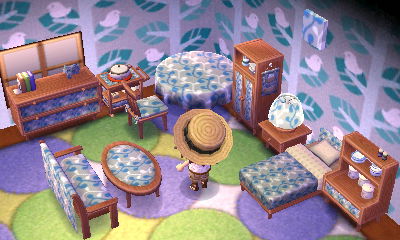 The alpine series (スカンジナビアシリーズ Sukanjinabia Shirīzu?, Scandinavian) is a series of furniture in the Animal Crossing series. It first appears in New Leaf.

The default series consists of wooden furniture with pastel blue cushions or table tops with white and darker shaded vines as a pattern. The matching wallpaper consists of a vine pattern, similar to what can be seen on the furniture. The carpet is a white-and-yellow square rug that partially shows some wood flooring underneath.

Name in other languages

Retrieved from "https://animalcrossing.fandom.com/wiki/Alpine_series?oldid=397200"
Community content is available under CC-BY-SA unless otherwise noted.