https://www.animal-crossing.com/new-horizons/
Animal Crossing: New Horizons (あつまれ どうぶつの森 Atsumare Dōbutsu no Mori?, Animal Forest: Gather) is a real-time social simulation video game developed by Nintendo. It was released on March 20, 2020, and is the eighth (and so far the newest) main-series game in the Animal Crossing series, after New Leaf. [2] The story starts with the player living on a deserted island as part of Nook Inc. Getaway Package.

New Horizons also introduces new features and mechanics, such as pole-vaulting over the river, cliff construction, waterscaping, and the introduction of crafting materials into the main series games, which had previously only been seen in Pocket Camp.

New Horizons was first announced on September 13th, 2018, during a Nintendo Direct with a 2019 release date and no official subtitle. The announcement of New Horizons occurred subsequently after Isabelle was announced to be a playable character in Super Smash Bros. Ultimate.

The first gameplay footage was shown during the Nintendo E3 2019 Direct (June 11th, 2019) and it showcased the new story and game mechanics. A Nintendo Treehouse live stream followed later that day with more gameplay and additional features. [3] More gameplay was shown during the Nintendo Direct on September 4th, 2019 where a received a new trailer with more information on the game and what it would bring was shown. During the E3 it was also announced that the game would be delayed until March 20, 2020.

On February 20th, 2020, in an Animal Crossing: New Horizons Direct, an in-depth look in the game was given.

The game was finally released on March 20th, 2020 as announced during E3 2019. There is also a channel for the game in the "News" section of the Nintendo Switch. The first article ever released was an article relating to Bunny Day.

Following the release of the game, periodic updates have been added, fixing bugs and adding new content. New major updates are added approximately every 1-2 months, adding new content alongside returning content. Alongside any new content, many of the events and features that were present in New Leaf have been gradually added every update, along with the return of a number of special characters every major update. Announcements for new updates for the game are often posted on their official YouTube channel.

On April 21st, 2020, a video was posted to the Nintendo YouTube channel detailing a new update, version 1.2.0, including new holiday events, new island visitors, and a new paintings section to the museum. Subsequent updates were announced via additional videos posted on their official YouTube channel.

On June 22nd, 2020, the trailer for the diving feature was announced for the first ever summer update, and the feature has been fully implemented in Version 1.3.0. Along with this is the return of Pascal.

Main article: NookPhone
In Nintendo's E3 presentation, it was shown that the NookPhone could be used to Call Islanders, look up DIY recipes, collect Nook Miles, and to take pictures. It was also confirmed that the NookPhone would have more apps than what was originally shown off in the direction. [4]

As the game progresses, the player can customize their NookPhone's appearance through a customizable case which costs 1,800 Nook Miles, use the Island Designer app to terraform their island, create more complex custom designs through Pro Designs, and even order items from the Catalog through their NookPhone.

Main article: Nook Miles
Nook Miles are a form of currency that the player can earn by completing tasks around the town, such as fishing, catching bugs, hitting rocks, etc. Nook Miles can also be used to pay off the player's first initial loan from Tom Nook (it is not possible to use Nook Miles to pay off future loans after the first). They can be used to buy special items like a Nook Inc. uniform, DIY Recipes, add Pro Designs to their Custom Designs NookPhone app, alongside other services and products.[4]

In New Horizons, players are able to use workbenches to craft furniture, tools, and some consumables (medicine and fish bait) using various materials gathered from their island and on mystery tour islands.

Initially, the player is only able to use Tom Nook's crafting bench, but eventually the player will learn recipes to create DIY benches of their own. Islanders can also teach the player new DIY Recipes if the player talks to them while they are crafting. [4]

New Horizons gives the player much more freedom to customize their island compared to previous iterations. The player is able to place furniture both indoors and outdoors; choose starting locations for their home, their residents' homes, and buildings other than Resident Services; move buildings once placed; place bridges and ramps; and change river paths and cliffs. Fences were also introduced to the game along with an official path creator, whereas in others games players would place designs on the ground for paths.

Additionally, when eating food such as fruit, turnips, or bamboo shoots, the player gains energy. Energy can be used to uproot whole trees, which can be planted elsewhere at their current height, and destroy rocks, which will respawn the following day (one per day). This energy can also be disposed of by using a toilet.

During the start of New Horizons, the player is asked to customize their character's eyes, skin, hair, nose, and mouth. These settings can only be changed through a vanity or mirror after creating the player's island. Hairstyles and colors can only be obtained by redeeming Nook Miles at a Nook Stop. A new addition to custom designs is face paint, which can be done by clicking on a custom design, selecting "Wear", and then selecting "Face Paint" once more. In the original Japanese version of the game, the player also has to choose between being a boy or a girl, but this was changed to simply read "Choose your style" with the boy and girl subtitles being entirely removed in the American localization to accommodate non-binary players.

If the player's Nintendo Switch is in the Southern Hemisphere, the game will accommodate the seasons and the night sky to that part of the world.[3]

The player will be able to upgrade their shops as in previous games, including the Resident Services building. [4]

Like in New Leaf, player characters are taller than previous installments. New to the series is the player's ability to change their characters' hairstyles, facial features and skin tone at any time.[3]

It has been confirmed by Nintendo that there will not be any new personality types in New Horizons. [4]

Clothing will be more characterized with many more realistic types of clothes including sweatshirts around the waist, backpacks, and phone cases.

The game now automatically saves which makes the Reset Surveillance Center obsolete. Due to this, Resetti now works for the rescue services.

Similar to choosing a layout for a town in the previous installment, the player has the option of choosing an island layout when applying. This also includes a choice in either living in the Northern or Southern Hemisphere.

Choosing either of Northern or Southern Hemisphere differ in seasonal change (e.g., spring in the Northern, fall in the Southern).

The location of the Town Plaza, Airport, Dock, and northern 'secret' beach seems to change along with the rest of the map layout. The airport and plane (which match) have at least blue, yellow, orange, or green for color possibilities.[5]

As of right now, there is only one island allowed per Nintendo Switch console. After progression in the game, you will be able to change the landscape by unlocking permits. A key difference from the previous installment of New Leaf, there are no bridges or ramps built when the player initially visits the island. The only way to navigate at first around the rivers is to create a vaulting pole with a DIY workbench. After three villagers decide to move in, Tom Nook will be able to create bridges for the island. The player also has to initially unlock a ladder to go up cliffs.

Players should consider the placement of the beaches, river heads, and ocean rocks when deciding on an island as these landforms are non-editable even as the game progresses.

The game has multiplayer capabilities where 7 other players on different devices can be invited via local network play or online network play. New Horizons also offers a single-console local co-op play, where up to 8 other players create residents on the same island, and up to 4 of these residents can play simultaneously. In order to interact with other people online, you will have to obtain a Nintendo Switch Online Membership and do not have parental controls restricting online interaction. [3]

Different user accounts on the same Switch console can create residents within the same island, and when one resident is playing, others can be invited to play as well with the Call Islander app on the NookPhone. During this simultaneous play, the main player is the "leader", and the joined players become "followers". In addition, leaders and followers can redirect making one another leader and follower.

The items that followers pick up will automatically be stored in the Resident Services building's recycling box because they won't have their own pockets, but the items can be claimed at a later time. Once party play ends, the current leader becomes the one playing.

The player showcasing a snowflake they caught.

The player talking to Rosie.

Another view of Autumn

A player standing in front of a tent on a beach.

The player walking around the island.

The player talking to Angus.

A player putting on a wreath.

A player catching a pond smelt. 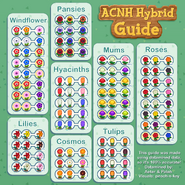 The NookPhone, including 9 of the apps.
Add a photo to this gallery

Retrieved from "https://animalcrossing.fandom.com/wiki/Animal_Crossing:_New_Horizons?oldid=541343"
Community content is available under CC-BY-SA unless otherwise noted.