Animal Crossing: Amiibo Festival is a spinoff game part of the Animal Crossing series for the Wii U. It was first announced at Nintendo's E3 2015 presentation on June 19th, 2015.[4] The game was released during the holiday season of 2015.

The game is somewhat similar to the popular party game, Mario Party, but with Animal Crossing characters.[5] Each game of amiibo Festival will correspond to a month of the year, with corresponding events, as in the main series Animal Crossing series games.[6] However, board game mode is not the only mode in amiibo Festival.[7] There are 8 other game modes available, including DLC.

The main screen in Animal Crossing: Amiibo Festival is a plaza where the player can select which games they want to play and customize certain elements. The middle has the area where villagers that the player inserted with amiibo cards and Lloid on top of a pedestal where they can change the human villagers names from the default Boy 1, Girl 1, Boy 2, etc. Around the board are mini games that can be played after they have been built. Near the top of the hub is the train where the main board game is played. In the top left corner is the happy ticket meter. This shows how many tickets the player has and how many happy points are needed to obtain another ticket. Happy points are collected by playing the games; the tickets are used to build the other mini games and add features to the game.

Animal Crossing: Amiibo Festival has several different game modes outside of the main board game mode that can be unlocked via happy tickets. Most of them require the use of amiibo cards instead of the amiibo figures used to play the board game.

The first mode is the traditional board game. This mode requires the use of at least one amiibo figure (any other players can use a preset human villager). Each game is set in a different month; the goal is to collect as many happy points as possible during the month. The game board has several different tiles which the player can land on: pink spaces give happy points and/or Bells, purple spaces will take away happy points and or bells, and green spaces are special event spaces that will appear when special villagers visit the town; At the end of the month all Bells will be converted to happy points and the player with the most happy points wins.

After playing the Game mode board mode twice the Balloon Island game mode is unlocked. In this game amiibo cards are used to drop villagers onto balloons, they will pop for points before landing on a moving Island to multiply their points by 1, 2, or 3; If the villager lands in the water instead of on the island they loose all the points they collected. The game consist of three rounds with the placement of the balloons changing each round and on the final round the islands multipliers increase to 1, 5 and 10.

Happy Tickets can be used to unlock Desert Island Escape. In this game, three amiibo cards are used to send villagers on a desert island. The main goal is to search the island to find 3 logs and a sail to build a raft, and escape. Enemies are encountered, and food must be found along the way. The game was soon ported to Animal Crossing: New Leaf as a minigame as part of the Welcome: Amiibo update the following year.

Most reviews received for Animal Crossing: amiibo Festival from fans and critics were generally negative. The game has received a 36.60% ranking on GameRankings, and a 40/100 on Metacritic. Many reviewers have said that the amiibo integration is "cumbersome" and "hard to play with", and also "boring, repetitive gameplay, and taking an hour to get anything good". It is the lowest rated game in the series. 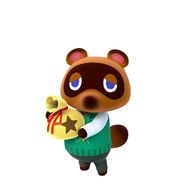 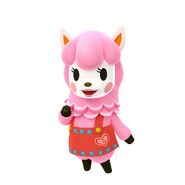 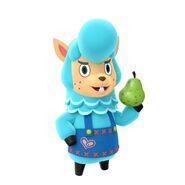 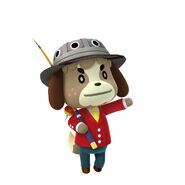 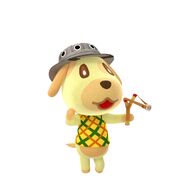 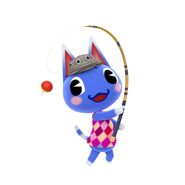 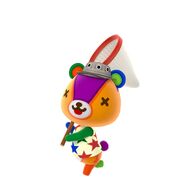 Retrieved from "https://animalcrossing.fandom.com/wiki/Animal_Crossing:_amiibo_Festival?oldid=535504"
Community content is available under CC-BY-SA unless otherwise noted.