Axes are a type of tool in the Animal Crossing series. Axes have been present in all of the games since the original Animal Forest. They are used to chop down trees or hit objects. New Horizons has a unique axe system that differs from prior installments.

Axes are primarily used to cut down trees in the player's town and are the only method of removing them. The axe can be swung at a tree, which will fall after three strikes. Striking a tree can cause any object on the tree to fall, including fruit and beehives. The removal of a tree results in a stump, which must be dug out using a shovel if complete removal of the tree is desired. Axes can also be used as a substitute for the shovel to hit rocks to find insects, Bells, and ore at a faster rate.

Axes used in any game after Animal Forest have a limited number of uses before shattering, whereas in Animal Forest, axes were indestructible like any other tool. As an axe degrades, cracks start to appear and become increasingly larger until the axe then breaks.

In New Horizons, axes are available much earlier and essential for the crafting system, being used to chop 3 types of wood from most trees and bamboo pieces from bamboo (up to 3 time per day, regardless of whether the tree is cut down or not), while striking rocks is required to obtain stone, iron nuggets, clay, and rarely gold ore (though a shovel is generally better suited to this task in this game).

In Animal Forest, there is only one axe available.

In Animal Crossing and Animal Forest e+, the golden axe was introduced to the series and can be obtained by completing a task.

In Wild World, the golden axe can be obtained by completing a task known as a trading event and is the final object that is traded for.

In City Folk, the silver axe was introduced to the series. It can be obtained in the same way as the golden axe, by completing a task which may result in being given either of the two rare axes, a regular axe or no axe at all.

“Whoa, amazing! I got a golden axe! I bet this thing will never break!”, New Leaf

In New Leaf, all axes are easier to obtain than in previous games. The more durable silver axe can be bought using medals on Tortimer Island, while the unbreakable golden axe is given to the player as a gift for buying 50 tree saplings from the Gardening Store.

In New Horizons, axes use the same crafting system as most items. As a result, there are three unique axes only available in this game. The inferior flimsy axe is less durable but is required to make the axe that rivals standard tools in prior games. The stone axe is an alternative to the axe that allows players to gain crafting materials without harming trees via chopping. The golden axe recipe is learned by the player after breaking axes a total of 100 times. Unlike the other tools, there are no unique variants that can only be bought at the upgraded shop, although regular axes are available. The golden axe possesses no unique attributes, although it has a greater durability than all other axes.

A player's reaction to their axe breaking in Animal Crossing 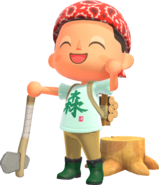 A player with a flimsy axe in New Horizons.

The stone axe favorited and in a player's inventory, New Horizons.