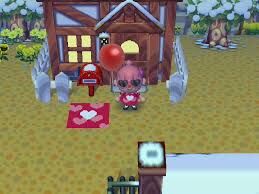 Balloons (ふうせん, Fūsen?, 風船) are handheld items and a piece of furniture that come in a variety of colors. Balloons have made an appearance in Animal Crossing, City Folk, New Leaf, and New Horizons.

Balloons come in different forms, such as rounded, heart shaped, and bunny shaped. They also come in various colors. Balloons can be lost; for example, if a player trips or is stung by bees while holding a balloon, the balloon will vanish into the sky and cannot be recovered.

The balloon makes its first appearance in Animal Crossing. There are two ways which they can be obtained. During Tom Nook's special sales, a random balloon is handed out to the player. Additionally, during the Fireworks Show, Redd runs a stand which the player can purchase balloons and other novelty items. If the balloon is selected from the item screen, the player is given the option to "Let go". This will cause the player to willingly release the balloon causing the balloon to not return. Balloons can be ordered from the Tom Nooks' catalog.

The balloon returns in City Folk. They can be obtained in the central part of the City to the left of the Fountain. When Phineas appears, he hands the player one of four handheld items, including balloons and bunny balloons. There are 6 different colors in 3 different types of balloons. but there's no telling which one the player will get each time.

The balloon is also present in New Leaf. It has the same role as it did in City Folk, but now they are obtained from players with whom the player has StreetPassed. If a player in the Happy Home Showcase is holding a balloon, the player can speak to them to receive their balloon. Balloons and other items can only be received if the two players have met more than once before.

Balloons can also be ordered from model homes in the Happy Home Showcase if someone has balloons on display in their home.

Balloons returns in New Horizons as part of the Summer Wave 2 2020 update. They are obtained during the Sunday firework festival in August from Redd’s raffle along with other festival prizes. They behave the same as balloons from New Leaf, being that they float away if the player trips while sprinting with it in hand or when they’re stung by wasps. By wearing the newly added King Tut mask, will cause the player to trip and fall face forward. If the balloon is equipped it will disappear from the player's inventory and float away in the sky. The player can bounce the balloon by pressing “A”. Like many other items in New Horizons, balloons can be displayed as furniture. 5 of the 16 new raffle items are the different variations of colored balloons. After August, balloons can be purchased from Nook's Cranny in the cabinet. A random color is available each day for 600 Bells