May to October (NH, north)
November to April (NH, south)

"I did it! I caught a banded dragonfly! Now to find the rest of its band!" —New Leaf

The banded dragonfly (オニヤンマ, Oniyanma?) is a bug found in all of the Animal Crossing series games. It is rare, variably fast (when undisturbed in GCN games they may fly as fast as a regular dragonfly) and are as a result difficult to capture. It can be found in the months of July and August, during the day between the hours of 8 am and 5 pm. While the Giant Petaltail is also present in August, the time of day the two appear does not overlap.

Despite being found during the summer it does not appear on the Island in New Leaf, but it can be found during some tours.

Upon donation to the Museum, Blathers will say:

"I've heard that Tom Nook pays quite a fair price for specimens such as this. Thank you for your generosity. But all that nonsense aside, this is a colossal dragonfly! Of course, that merely makes it colossally repulsive."

"Hoo! You caught a banded dragonfly! Most impressive. Rather difficult, was it? Bit of a hairy fellow, wot? I say, some cosmetic plucking would really help..."

"Banded dragonflies are rather flashy... Just look at those piercing green eyes. The black and yellow body! Not to mention their sheer size and--OH, HORRORS! The beast is looking right at me! Look away, fiend!"

It can be found in the first terrace of the bug exhibit, flying near the small pool of water near the flowers. It shares its pool with the Darner Dragonfly.

"Banded dragonflies have black-and-yellow-striped bodies and bright-green eyes. They are large and can fly quite fast. They have strong jaws, so it might be painful if you're bitten. Their larval stage lasts two to four years, where they live near water, feeding on tadpoles and small fish."

"The banded dragonfly is known for its black-and-yellow-striped body, as well as for its piercing green eyes. And it is those very eyes that help make dragonflies master hunters, you see. Alas, when one looks at me, I can't help but feel it is sizing me up for a meal! Hoot! The horrors! Look away, fiend!"

"It's an oni! I caught a banded dragonfly [oniyanma]! Did I catch an oni?" (translation) 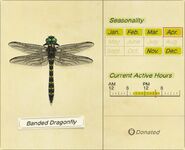 Banded dragonfly in the museum.

The banded dragonfly is the largest species of dragonfly native to Japan. It reaches a length of nearly 10cm. In Japan, this species is known as oniyanma. They prefer small, clear woodland streams and can often be found flying slowly above the surface. However, when disturbed, they can fly remarkably quickly to get out of perceived danger. This is reflected by the speed at which the banded dragonfly moves in the Animal Crossing series.

Retrieved from "https://animalcrossing.fandom.com/wiki/Banded_dragonfly?oldid=507090"
Community content is available under CC-BY-SA unless otherwise noted.