""I caught a barreleye! Like eyeing fish in a barrel!"" —New Horizons

The barreleye is a new fish introduced in New Horizons. It can be found in the ocean between 9pm and 4am.

"I caught a barreleye! Like eyeing fish in a barrel!" -New Horizons

Upon donation or selecting "Tell me more about this!", Blathers will say:

"The barreleye is a deep-sea fish with protuberant eyes and a clear head, so some of its organs are... visible. At first blush, a transparent head seems absurd, but there is a reason: so it can see things directly above! But I must confess--the more I learn about deep-sea fish, the happier I am to live on dry land, wot." 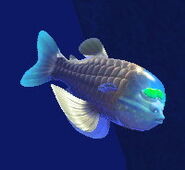 Barreleye in the museum

The barreleye (Macropinna microstoma) is a deep-sea fish found in tropical-to-temperate waters of the Atlantic, Pacific, and Indian Oceans. It has been known to science since 1939, but was never photographed until 2004. It is characterized by its seemingly-transparent head (caused by cartilage), with its green namesake eyes embedded within. These eyes are normally situated upwards, allowing the fish to spot potential predators and prey, but they can also be turned forwards.

Retrieved from "https://animalcrossing.fandom.com/wiki/Barreleye?oldid=556622"
Community content is available under CC-BY-SA unless otherwise noted.