铃钱/鈴錢 (líng qián, "money")
Bells (ベル, Beru?) are the main currency used in the Animal Crossing series. Although most frequently used to purchase items from stores and pay off the player's mortgage, Bells may also be used in several other respects, including trading with villagers and other services. To date, the smallest denomination of Bells is 100, which is depicted as a single golden coin.

Bells can be found in their item form by shaking trees, hitting money rocks, and digging at shining spots. Bells as items can then be manually added to the player's wallet, where they no longer occupy inventory slots. The wallet has a capacity that varies per game, and any further Bells that the player wishes to carry must be carried in item form either in inventory slots or inside letters.

Bells in their item form can be picked up and stacked as long as the combined value does not exceed 99,000 Bells. However, bell denominations under 1,000 cannot be stacked on denominations over 1,000 (for instance, 500 cannot be combined with 2,000).

In Animal Crossing, the player could carry up to 849,999 Bells at any one time in their inventory. In Wild World and City Folk, this is substantially expanded upon, as the player can have 99,999 Bells in their wallet and fifteen 99,000 Bell bags in their pockets, bringing the grand total to a maximum of 1,584,999 Bells on hand at one time. As New Leaf has one slot in the pocket more than the previous games, the total is raised to 1,683,999 Bells. Although an additional 990,000 Bells can be held in letters, these cannot be accessed for spending. In New Horizons, the player can have a maximum of 40 inventory slots, and can carry a maximum 4,059,999 in their inventory.

Quantities of Bells are most commonly represented by tan-colored sacks, which feature a dark star marking in City Folk and New Leaf. Sacks are used in all games to represent Bell values ranging from 1,000 to 99,000.

In GCN games Bell sacks also represent lower values from 100-900. In Wild World, the 100 Bell coin was introduced, depicted as a generic golden coin with a star printed in the middle. This coin graphic replaces the Bell sack for the aforementioned value range.

Bells are most easily obtained by selling items to the store. Bells may also be received from villagers, struck from money rocks, dug up from shining spots (Switch, GCN and N64 versions of the game only), obtained through Bell Vouchers (which are sold to the store), and shaken from both regular and money trees.

During the summer, a popular strategy is to stock up on high-selling nocturnal beetles and fish. This tactic is available year-round in New Leaf, where players can visit Tortimer Island which features summer collectables at any time of the year. Another less profitable option confirmed for New Leaf is to save and exit the game, store all tools somewhere, collect all seashells and sell all the seashells, and repeat all of those steps again. This is possible because the seashells will be generated during the preparation of the town.

Specifically in New Horizons players create Tarantula and Scorpion on mystery tours through the Dodo Airlines in order to pay off their home loan. Money rock island is another way to earn Bells from each rock on that specific island.

Villagers will often ask for Bells, either as part of minigames, or trades. Bells can also be sent through the mail as a present. In New Leaf villagers will refuse Bells as a gift during birthday parties, often commenting that "it would make our friendship weird". Villagers will always refuse Bells given to them as a gift with an excuse that varies on personality type. 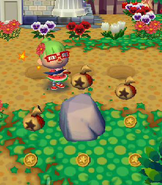 A player with a Bell Rock.