“Even though there's no 'I' in team, there's no 'everybody' either!”
― Picture quote, Wild World

Bill (ピータン, Pītan?) is a jock duck villager in the Animal Crossing series. He appeared on the cover of Animal Crossing, in the background, appearing to be walking up to the house. His name comes from the name of the duck's beak, a bill. His Japanese name is the word for Century egg, which is a duck egg that has been preserved in ash for several months. He shares the same catchphrase with Drake, another duck villager. He has appeared in every game to date so far.

Bill is a maroon colored duck with wide white-ringed eyes, a yellow beak, and a lock of brown hair on his head. He is initially wearing a No. 2 Shirt.

Bill has a jock personality and has a great interest in sports and bodybuilding. Jock villagers are hyperactive and motivated but often come across as egotistical and dense. As a jock villager, Bill is very interested in his hobby, and may compete against the player at catching bugs and fish. Jock villagers get along with peppy, cranky and uchi villagers, but conflict with the laid-back lifestyle of lazy villagers. Snooty villagers may also be difficult to get along with for Bill.

Bill's house has a kitchen theme, with a a huge amount of furniture from the Exotic Series such as the Exotic Bed, Exotic Bureau, Exotic Screen, Exotic Wardrobe, and the Exotic Bench. Bill's wallpaper is the Lattice Wall and his flooring is the Kitchen Flooring. Bill does not have a stereo at first, but if he gets one, K.K. Reggae is played. His house has two bird cages, which is perhaps ironic considering he himself is a bird. In Animal Crossing, Bill has many insects in his house along with a phonograph that plays K.K. Reggae.

For Bill, his body is his temple. It's also his paycheck, given that he's a professional athlete. In what sport? Uh...

At level 7 friendship, he will reward you with a No. 2 shirt and sparkle stones (x1).

At level 10, he will request that you craft a lotus pond.

At level 20, he will reward you with pic of Bill and sparkle stones (x1).

Bill is featured in this play set, along with the Kiddie Couch and Lovely Kitchen. 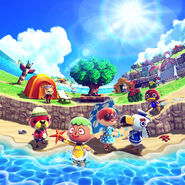 Retrieved from "https://animalcrossing.fandom.com/wiki/Bill?oldid=398593"
Community content is available under CC-BY-SA unless otherwise noted.