This article is about the special character. For the peppy tiger, see Bianca (tiger).

“All right! Let's cause some mischief!”
― Blanca, New Leaf

Blanca's gender is variable. Like Gracie and Saharah, Blanca is listed as being male in Japan and Korea but is female internationally. In Wild World, City Folk, and New Leaf, Blanca has a distinct lazy/jock voice, both of which are male personality types.

Blanca is a white cat with no face. In all games prior to New Leaf, She wears a blossom shirt. Her face can be drawn on by the player.

From New Leaf onwards, she wears a yellow and red harlequin outfit, with a blue ruffled collar. Instead of the player drawing her face, she uses makeup to transform herself into one of the player's villagers.

In Happy Home Designer, she wears a flower-print shirt (different from the blossom shirt) as her casual clothing, and can be given hats or accessories by the player.

In Wild World, Blanca will appear if the "Mysterious Cat" mode is turned on (which can be done by using the Telephone in the attic), and if the player has used WI-Fi. Blanca may appear randomly if the previous two conditions are met.

Sometimes, when Rover is at The Roost, he will ask the player if the player have seen "The Mysterious Cat". He will tell the player he goes from town to town in search of it, suggesting that Rover may know, or knew, Blanca. 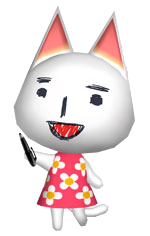 Blanca makes another appearance in City Folk. she may appear anywhere in the town as long as WiiConnect24 is enabled on both the Wii and the telephone in the attic. Like in the previous games, she will lack a face and ask the player to draw her one. Blanca's face can be drawn a maximum of two times before Blanca refuses any more in one day. If the player doesn't draw Blanca a face, Blanca will get angry and tell the player that she won't be able to see anything.

A concern with Blanca's game mechanic was that someone's registered friends (strangers or not) could draw inappropriate things on her face, and that Blanca with these face designs could possibly be transferred to unsuspecting players.

Blanca appears again in New Leaf. Unlike past games, Blanca is the host of the April Fool's Day festivities. She will appear inside villagers' homes, wearing makeup to look identical to them. The player must decide which villager is the real one, and if they are successful, they will receive Blanca's and that villager's Picture, and Blanca will move on to the next villager's house. Each time she is found out, the player will receive Blanca's picture.

After the Welcome amiibo update, Blanca can visit the Campground. When inside her RV, her bio will read:

Sure, she likes to stir up trouble around the town. But when you see her out relaxing at the campground, she looks so... Well, she still looks pretty creepy.

Blanca is an optional character in Happy Home Designer. If the player has her amiibo Card, they can design her house. Once her house is designed, they can visit and speak with her. She also be invited to other villagers' houses via her amiibo Card.