Bluebear (グルミン, Gurumin?) is a peppy cub villager in the Animal Crossing series. Bluebear has appeared in every game to date. Her English name could possibly be based from fruit, namely blueberries, and her species. This is supported, but not completely, by her initial phrase. Her picture quote is similar to that of the normal wolf villager, Skye.

She appears on the cover of Mr. K.K.

As her name suggests, Bluebear is a light-blue bear. She has dark blue hair and a white-tipped muzzle and paws, complete with white inside her ears with a dark blue outside. She wears some pink blush, and initially wears the Lemon Gingham, which is yellow, orange and white. Bluebear appears in every single game so far.

In Animal Forest, Bluebear's eyes are bigger and has a different smile. She looks like Olive, another cub, or Dotty, another peppy villager. She is often considered to be the female equivalent of Kody.

In Animal Crossing, Bluebear's house doesn't have one particular theme, instead, she has a wide variety of items. She has the Blue Bed and the Blue Clock, as well as two Red Armchairs, and two Baby Bears. She also has a Cabana Table with nothing on it, and a Red Boombox that plays K.K. Ska. She has the Exotic Wall, and the Cabana Floor.

Bluebear can be pushy... and maybe even a little too pushy sometimes. Luckily, her friends don't seem to trust in her advice.

At level 7 friendship, she will reward you with a lemon gingham tee and sparkle stones (x1).

At level 15, she will request that you craft a Papa bear.

At level 20, she will reward you with pic of Bluebear and sparkle stones (x1).

A plush Bluebear along with some other original Animal Crossing characters

Bluebear is in this fishing playset, including a Frog, String Fish, and a Tank. 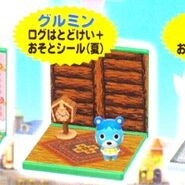 Bluebear is featured in this playset, with Cabin furniture, wallpaper and flooring. 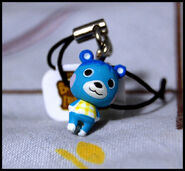 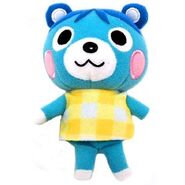 Retrieved from "https://animalcrossing.fandom.com/wiki/Bluebear?oldid=395198"
Community content is available under CC-BY-SA unless otherwise noted.