Brewster (マスター, Masutā?, Master) is a character who works in The Roost all hours of the day in the lower floor of the museum or in his own shop. He is a quiet, reserved Pigeon with an interest in coffee. His name is a portmanteau of 'rooster' and 'brew'. In City Folk, he also has an interest in collecting gyroids.

He sells a cup of coffee per day worth 200 Bells. He prefers the player to drink the coffee as soon as it is given to them, and will be shocked if the player responds by letting it cool. In New Leaf, this dislike will be swayed if the player purchases a lot of coffee at The Roost.

In Wild World, he will admit he owns sugar, but only enough for himself. However, if the player visits him often and does not say it has to cool, he will offer the player some sugar and be shocked if they refuse it. He will also offer Pigeon milk after the player has bought coffee for about seven days.

In New Leaf, he now runs his own coffee shop, called the Roost, once it has been built via public works project.

After talking to him over the course of a few weeks, he will tell the player his story, which suggests he used to own a coffee shop in the City before moving to the town to open up a small business in the museum, after meeting Blathers. In New Leaf, Blathers is again shown to be his friend as he is the one who suggested The Roost in the first place.

Brewster shows a noticeable interest in gyroids. In each game, gyroids are visible on the shelves within the cafe. In New Leaf he has attempted creating his own gyroids, something influenced by his original interest in gyroids from a time when a customer showed him a gyroid long ago. In City Folk he offered storage of gyroids, though this is not present in New Leaf.

Brewster's role in Wild World remains the same throughout the series. He will serve the player a cup of coffee a day for 200 Bells and be present when other special visitors and villagers are in The Roost. He will also be present when K.K. Slider is performing. After buying coffee for a while, he will offer the player special drinks which may include Pigeon milk. He will also ask the player if they have a favorite blend, the player can only choose "the usual". He will then tell the player the exact temperature, 176 degrees. When talked to, he will say, "How are you doing?"

In City Folk, once the player becomes friends with him after drinking seven cups of coffee without letting them cool, he will offer to store the player's gyroids if the player is holding one while speaking to him. He will store one of each gyroid when spoken to by talking to him from across the bar (not on the stool). He may also offer a shot of pigeon milk like he did in Wild World. On Valentine's Day, he will offer the player hot chocolate instead of coffee, and will say "Happy Valentine's Day!" instead of the usual "Thanks". If the player takes a picture during one of K. K.'s performance and talks to Brewster afterward he'll say, "No pictures during the performance, please.... it bugs the talent."

In Animal Crossing: The Movie

Brewster has a small role in Dōbutsu no Mori. He first appears when Ai enters The Roost to deliver a package for Apollo and only has lines after Sally (Margie) moves.

Brewster appears occasionally in the background of Smashville and as a trophy in Super Smash Bros. Brawl.

Brewster in Wild World.
Add a photo to this gallery 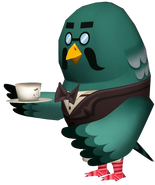 Brewster in City Folk.
Add a photo to this gallery

Brewster at the The Roost ceremony in New Leaf.

Brewster telling the player they do not have enough money in New Leaf.

Diana and the player in The Roost.

Brewster giving the player one of his custom gyroids.
Add a photo to this gallery

Brewster's PC Icon
Add a photo to this gallery

Brewster as he appears in Dōbutsu no Mori.
Add a photo to this gallery

Brewster plush
Add a photo to this gallery

Retrieved from "https://animalcrossing.fandom.com/wiki/Brewster?oldid=417871"
Community content is available under CC-BY-SA unless otherwise noted.