None
“You may think you have stepped out into a sprawling metropolitan street while walking about your neighborhood this week. Do not worry though, the town has not been moved without your knowledge... It is just decorated for Bright Nights!”
― Narrator, Wild World

Bright Nights is a Wild World event in February. It starts on the second Monday of February and lasts until the following Sunday.

In accordance with Bright Nights tradition, villagers decorate their houses with bright lights and hold a competition. The player is the judge of the villagers' decorations, and should walk around nightly to check out the spectacle, then visit the Town Hall to talk to Tortimer.

When the player first talks to him each day, he will ask what they think of the lights in the town. The last chance to vote is on Saturday. After choosing each evening, Tortimer will tease and ask cheekily if the player has a crush on that person. On Sunday, he will name the villager who received the most votes the Bright Star of the festival. Sometimes, a winner will give gifts to the player.

Villagers may still move in and out during Bright Nights. K.K. Slider will still be at The Roost at his regular time. In addition to the villagers' houses, cedar trees are also decorated with lights.

Bright Star is a title obtained by the animal villager who wins the contest. Jock villagers, who are usually more competitive, are sometimes outraged when they find out they did not win, whereas normal villagers tend to be more humble. 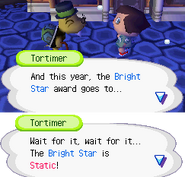