This article is about the various insects and creatures that can be caught with a net. For the glitches and errors, see Glitches. 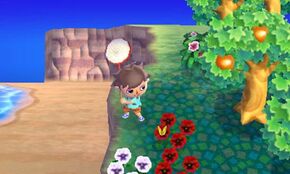 AF, AF+, AC, AFe+, WW, CF, NL, NH
Bugs are collectable items in the Animal Crossing series. Players can catch them with a net. They can be donated to the museum, sold to Tom Nook, or placed in the player's home inside a Bug Cage, like a piece of furniture. Most of them are worth a lot less than most fish at Tom Nook's store. A large amount of bugs will only emerge during the Summer, a few unique species emerge in Autumn and Spring, and there are very few during the Winter.

In the original N64 Animal Forest, there are 32 species obtainable.

In the Japanese Animal Forest+ and its English counterpart Animal Crossing, there are 40 species obtainable, adding 8 bugs to the game. Pondskater, Ant, Pill Bug, Mosquito, Mole Cricket, Spider, Snail, and Bagworm are new to the game.

When the player catches all the types of bugs, Tortimer will appear outside the player's house the next day and award them with a Golden Net.

In Animal Crossing, he will say this to the player:

"I've been a-waiting for you, player. Word is that you've been catching bugs... Those tiny little monsters... You likely had no idea at the time, but when you caught every last kind of insect we know of in these parts... You became the most famous bug-catching-person in the history of <Town>! Hurrah for you, sprout! To commemorate such a wild and woolly occasion, I'd like you to have this fine Golden Net. I suppose now that you're a big, famous bug-catcher you may not need it... ...But this is the kind of net that really makes a difference when you're having trouble catching butterflies. Yepper! Treat 'er with care, sprout! You won't be getting one anywhere else, and there's no replacing it, you know... Yepper, chasing bugs is good, but I'm partial to chasing Zs. Oooh... Looks like a tough crowd out there today..."

Here are all of the bugs in the mainline series based on appearances.