Bunnie (リリアン, Ririan?, Lilian) is a peppy rabbit villager from the Animal Crossing series. Her English name comes from the type of animal she is, a bunny, and her catchphrase is a phrase that matches her peppy personality. Her design is based on the ringo usagi, a method of cutting apples to make them look like rabbits.

She is on the back of the City Folk game box, appearing to be running. She has appeared in every game up to date. She appears on the album covers for Mr. K.K. and K.K. Country.

Bunnie is a chalky, burnt-orange rabbit with a creamy beige face and arms that are tipped the same color as her head; her bunny tail and legs are the same color, too. Her face has pink blush and a nice, welcoming smile. Her eyes are styled in a pointy diamond-like way, and her ears are peachy orange on the inside.

Her initial clothes appear to be the Lotus Shirt, which is turquoise blue with pink flowering lotuses patterned all over it. While her initial shirt in the N64 and GCN versions is a Flicker Shirt and she wears a Jade Check Print in Animal Crossing City Folk as her initial shirt.

From Animal Forest to City Folk, Bunnie's house has stayed mostly the same, with a few minor changes in the installments. She has many pieces from the Lovely Series and the Regal Series, such as the Lovely End Table, Regal Vanity, and Lovely Chair. Other furniture in the N64 and GCN games includes the Papa Bear and two shirts, the Red Check Shirt and the Candy Gingham Tee with a Lovely Stereo in the back of her house.

In Wild World and City Folk, she has the Mama Bear and the Green Bed. Her choice of flooring and wallpaper is the Wood Paneling on her walls and a Parquet Floor in all games except for New Leaf.

In New Leaf, Bunnie's house has changed drastically from the past games, with a much more modern theme and lacking furniture from the Lovely Series. She has different pieces of furniture that helps add a modern theme towards her house, including two Regal Sofas, a Pine Table with a Mama Bear, a small and medium magazine rack, and a House Plant.

Other furniture in her home includes the, an Upright Piano, a Conductor's Stand, and a Retro Stereo. For her choice of flooring and wallpaper, she has the Citrus Wall and the Flower Pop Carpet.

In every main game she has been in, Bunnie has either a Retro Stereo or a Lovely Stereo (N64 and GCN) that has K.K. Aria playing on it.

She's fun to be around, but her friends can never shake the sensation that they're not quite on the same page as Bunnie, no matter what they're doing together.

At level 7 friendship, she will reward you with a jade plaid tee and sparkle stones (x1).

At level 15, she will request that you craft an upright piano.

At level 20, she will reward you with pic of Bunnie and sparkle stones (x1).

Bunnie made into a soft, plush doll 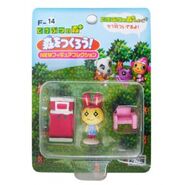 Bunnie is featured in this toy set, along with the Jingle Wardrobe and Lovely Couch. 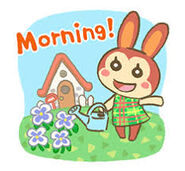 Retrieved from "https://animalcrossing.fandom.com/wiki/Bunnie?oldid=399742"
Community content is available under CC-BY-SA unless otherwise noted.