View source
watch 01:54
Arcane: League of Legends - The Loop
Do you like this video?
Play Sound

A Sunday in March or April

Bunny Day Theme
Bunny Day (Japanese: イースター Easter) is a spring event which is the Animal Crossing series equivalent of Easter. It was introduced in City Folk. It has a different date each year, but will always fall on Easter Sunday. Zipper T. Bunny hosts the event outside the Town Hall or Resident Services in New Horizons. It is the only time of year the player can obtain the Egg Series of furniture. Zipper is an animal in disguise; if the player walks away from them, Zipper will stop dancing and sigh, and, if spoken to from behind, they will reveal the zipper on their costume. Often Zipper murmurs things such as "My mask fogged up again", "Geez how many of these did I bury?" or "I can't wait until this is over..." When a player tries to speak to them from behind, they will say either "Hey! You were trying to look at my back, weren't you?" or "Like I said, please don't look!"

Keeping to the idea of Easter, the Bunny Day event revolves around an Easter Egg Hunting competition. 30 Easter eggs are hidden around the town, which can be opened to reveal either candy (18) or a Bunny foil (12). Zipper will exchange one Bunny foil per item of furniture from the Egg Series. The Villagers around town will not get involved in the events, but will talk about Zipper and finding mysterious eggs buried around the town. Each character gets their own set of eggs.

In New Leaf, there are six types of eggs which can be found by fishing, diving, shaking trees, digging up holes, hitting rocks and shooting presents in the sky, making the event more challenging and varied. Inside the eggs are either candy, winning tickets or grand prize tickets.

If a player eats an egg that they find, they can find a prize ticket. Tickets can be exchanged for an item in the Egg Series, and Grand Prize Tickets can be exchanged for Zipper's picture. The only item in the Egg Series that can't be obtained by exchanging tickets is the Egg Basket. This is obtained by giving Zipper all six different types of eggs, which is the first thing he asks for.

Bunny Day is the first seasonal event to occur after New Horizons's release, and unlike in previous installments, has a "prep week" leading up to the event itself. On the first day of prep, which is the Sunday proceeding Bunny Day, Zipper appears on the island to tell the player about the event and give the Bunny Day bed recipe; if the player misses Zipper, the recipe will arrive in the mail the next day.

During the week of preparation, eggs will begin to appear on the island. In total, there are 6 types of eggs to collect, Sky (found hanging on multicolored balloons), Water (found via fishing), Leaf (found in groups of 3 on trees and needs to be shaken off), Stone (found by hitting a rock with a axe or shovel), Earth (found in the ground like fossils), and Wood (found occasionally by hitting a tree with a axe). These eggs are used to craft items in a new series, the ¨Bunny Day Series.¨ Like in New Leaf, the eggs can be eaten, and in New Horizons eating an egg provides stamina in the same way as eating any fruit.

Players can also learn unique DIY recipes for a hat, dress, and shoes themed around each type of egg after collecting a certain amount of eggs of that type. Collecting all of the egg-themed costume recipes unlocks the recipe for Egg party hat and Egg party dress.

These DIY recipes can be found in a few different ways:

On Bunny Day, Zipper will be present in the Resident Services plaza and all villagers will be dressed in egg costumes when they are outdoors. The player can obtain the Bunny Day arch recipe by speaking to Zipper. From then on, Zipper will also allow the player to trade in 3 of any type of egg for 1 of any other type, and also exchange 1 of each type of egg together for a Bunny Day basket furniture item, which has no DIY recipe.

Upon finding and crafting every single Bunny Day DIY recipe, including the Bunny Day arch, talking to Zipper again will reward the Wobbling Zipper toy recipe. After crafting that recipe and returning to Zipper for a third time, the player will receive the final prize of the event: the Bunny Day wand recipe.

Bunny Day has two furniture series associated with it. In City Folk and New Leaf, it's the Egg Series, and in New Horizons, it's the Bunny Day Series.

For more information, see the Egg series.
The following furniture can be awarded by Zipper T. Bunny for exchanging foils of tickets.

For more information, see the Bunny Day series.
Instead of exchanging tickets to Zipper in New Horizons for furniture, the event causes several recipes to be obtainable via special rainbow balloons or messages in bottles during the week preceding Bunny Day. These recipes can only be crafted using eggs found during the same event period, and once every recipe is obtained, the rainbow balloons will no longer give out recipes and the rainbow bottles will cease to appear.

If all the event's goals were completed on a previous Bunny Day, Zipper will congratulate the player anyways and give them a Bunny Day wand. Beside the DIY projects the player can request a Bunny Day Basket from Zipper on Bunny Day if they have one of each egg type in their pockets.

A player with an egg. 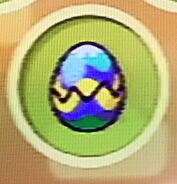 Everything from the egg series from bird’s eyeview

Catching a Easter Egg from a Pond.

Catching a Easter Egg from the sea.

Shooting down a balloon holding a Air Egg.

After shooting down a balloon holding a Air Egg.