The bus is a third form of transport in the Animal Crossing series, found only in City Folk.

The bus is a yellow school-themed vehicle and replaces the train and taxi for the introduction sequence when starting a new player. Like previous games, this form of transport is driven by Kapp'n. When a new player is created, Rover will meet the player on this bus and enable them to determine name, gender, town name (if applicable) and their appearance.

After the introduction the bus can be ridden to the City and back. It is free to ride the bus.

Inside, there are three rows of green padded bench seating, with a figurine of Kapp'n on the dashboard (similar to the one in the taxi), and an advert poster with Lyle on it, on a partition wall behind Kapp'n. 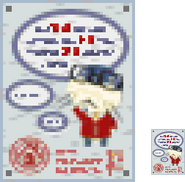 Advert for the Happy Room Academy

A player boarding the bus
Add a photo to this gallery
Retrieved from "https://animalcrossing.fandom.com/wiki/Bus?oldid=337441"
Community content is available under CC-BY-SA unless otherwise noted.