The Animal Crossing series features in a number of Nintendo games, as well as other media, making cameo appearances in games such as Super Smash Bros. Brawl and WarioWare: Smooth Moves.

References to other video games in Animal Crossing

References Throughout the Series

The Legend of Zelda

The Animal Crossing series makes several references to The Legend of Zelda series, including:

Animal Crossing in other video games

In Super Smash Bros. Brawl, a wider variety of Animal Crossing trophies are obtainable, along with music, stickers, and even a stage appear. On the Animal Crossing stage, Smashville, red balloons float around with food, a reference to floating presents. A new item is also introduced, the Pitfall Seed, which can be thrown and trap enemies in a hole. Mr. Resetti also appears as an assist trophy, where he starts yelling at players, much like when the player resets in an Animal Crossing game. Also, "KAPPN" can appear from one of the random nicknames.

In Super Smash Bros. Wii U/3DS, the playable character makes an appearance under the name of Villager. This is the first time an Animal Crossing character is a playable fighter in the Smash Bros. series, with previous games only containing non-playable background characters. Isabelle appears as an Assist Trophy, tossing healing fruit to whoever summoned her.

In Super Smash Bros. Ultimate, the Villager returns as a playable character while Isabelle becomes a new playable character. Despite the two having a slightly similar moveset and similar Final Smashes, Isabelle is not considered to be an Echo Fighter.

During the 9-Volt level in WarioWare: Smooth Moves, one mini-game involves the player controlling a character from Wild World (either a male or female, depending upon the player's gender). The player must pull up the Wii Remote in order to catch a fish from the river. There are three difficulty stages to this game, Easy, Intermediate, and Difficult.

All fish from Wild World are potential catches in this mini-game. Failure to pull up the fishing rod will result in the player losing a life.

In one mini-game in the Ashley level, a player has to rotate a silhouette of an object in order to work out what the object is- after a time, they are given a selection of objects that it could potentially be, usually all quite similar in shape.

Sometimes, a thin version of the typical gyroid may show up- objects similar to it in shape include a cacti and an eraser.

In Kid Icarus: Uprising's Together Mode, several bots are named after iconic Animal Crossing characters, including Resetti and Moppina.

Kirby with a stone ability will sometimes transform into Tom Nook as a golden statue.

In Kirby Super Star Ultra (a remake of the SNES title Kirby Super Star), there is a sub-game called "The Great Cave Offensive". The objective of it is to escape with the most items possible, and some of these items are references to other games from Nintendo. One of these items is the Gold Watering Can, a reference to the Golden Watering Can from both the Animal Crossing and Harvest Moon series.

In Kirby's Epic Yarn, Kirby can rent an apartment and collect items with which he can decorate his apartment. This is similar to decorating one's house in the Animal Crossing series. Certain items in various levels resemble pitfall seeds.

In Miitopia, costumes of Isabelle, K.K. Slider, Mr. Resetti and Tom Nook can be unlocked if the player scans the corresponding amiibo.

In Wii Fit + there is a game called Segway® Circuit, in which the player (with the help of a pet) has to stop moles from taking beach balls. These moles resemble Resetti and are shown digging through the ground and where the player starts the game.

In Pikmin 2 there is a treasure called the "Gyroid Bust". It is found in the Bulblax Kingdom and is the final treasure in the cave, following the Scorch Guard that is inside the Emperor Bulblax. The "Gyroid Bust" represents the Gyroids that can be found in the Animal Crossing series.

The presents in Animal Crossing games resemble the presents from the Mother series.

The clay figure’s US description is, "This clay figure looks sort of familiar. Did you find it in the ground?", which is a reference to gyroids. The EU description also is a reference as it says, “Can't help feeling we've seen this odd clay figure somewhere before..." . In the island menu in the summer, the player can hear bug sounds like cicadas. These sound effects are directly reused from New Leaf.

Isabelle, Resetti, and Tom Nook and others can be unlocked in Taiko no Tatsujin: Atsumete Tomodachi Daisakusen! by using amiibo figurines and or cards that allow the player to unlock various soundtracks from New Leaf and other games, figures, elements in the Kisekae shoot mode for pictures, and features in the Dress-Up studio. Isabelle, Resetti, and Tom Nook are on Wada-don while playing soundtracks from New Leaf.

The screen for choosing Animal Crossing in Taiko no Tatsujin: Atsumete Tomodachi Daisuke.

In Transformice, the leaf from Animal Crossing: New Leaf, Reese's head and hair, Isabelle's hair, a Molly skin, and fossil ball skin appear in the shop.

In Monster Hunter 4 Ultimate, Isabelle and Resetti are unlockable DLC as Guise Palico skins, which unlock Animal Crossing related missions in the game. 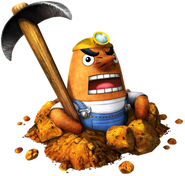 A twitter ad for the company featured a GIF ad called "Welcome to Savings Town", with the art style and logo resembling that of the Animal Crossing series.[1]