WW, CF, Dōbutsu no Mori
“You'll never get THIS monkey off your back!”
― Picture quote, Wild World


“Hackpth! When I catch a cold, it's like, I'm sick for a loooooong time...”
― Champ, whenever he is sick in City Folk

Champ (さるお, Saruo?) is a jock monkey villager in the Animal Crossing series. His name comes from the word "champion", which goes with the jock personality, and the word chimp, which is a type of simian. His Japanese name may come from the word saru meaning "monkey". He appeared as a minor character in Dōbutsu no Mori. His catchphrase, "choo CHOO", could be a reference to Animal Crossing, for Champ somewhat resembles Porter, the monkey who resided at the train station. Like Kaitlin, he is one of the only two characters that appears in both Wild World and City Folk, but does not appear in New Leaf or its successors. Because of this, Champ and Kaitlin are the only villagers in the entire series not from the original Animal Crossing to get cut from an installment after appearing in a previous installment.

Champ is a brown monkey, initially wearing a yellow paw print shirt. He has a long curly tail and black dots for eyes. He is very similar in appearance to Porter, the monkey that runs the Train Station in the early games of the series, as well as in New Leaf. He also looks very similar to Ukikis from the Mario series.

Champ has a jock personality and has a great interest in sports and bodybuilding. Jock villagers are hyperactive and motivated, but often come across as self-centered and dense. As a jock villager, Champ is very interested in his hobby, and may compete against the player at catching bugs and fish. Jock villagers get along with peppy, cranky and sisterly villagers, but conflict with the laid-back lifestyle of lazy villagers. Snooty villagers may also be difficult to get along with for Champ.

Champ's house has a red tile flooring and a backyard wall. He also has a model train, along with items from the red set. If he has a stereo, it will play K.K. Salsa. Also take into account the fact that the wallpaper and flooring resemble that of the train station (fence wall and brick flooring), and the alarm clock is similar to the basic train station's clock.

Champ also appears in the movie with the name Saruo, although he had very few lines. He is always working out, jogging, or lifting weights. He always seems to be running around saying "uki uki", which is described as monkey noises. When the UFO crashes and the parts scatter, he finds the original part to the fake UFO, and Ai finds the alien in gear form, thus causing the Miracle of the Winter Festival.

He was voiced by Yasuhiro Takato.

Like most characters that appeared on Dōbutsu no Mori, Champ is available to buy as a plush toy and coin pouch, as part of the merchandise. 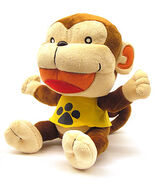