The cliff marks the edge of a town in all Animal Crossing series games. The waterfall falls down the cliff. The Town Gate is built into the cliff like a tunnel, giving the impression that the cliff is like a wall. In Animal Forest, Animal Crossing, and City Folk, there is a separate cliff that runs through the middle of the town. This has 2 ramps on the side of it that connect it to the lower tier of the town.

In New Leaf, cliffs separate the beach from the mainland, and two ramps are used to access the beach. If the player has a wetsuit, they can jump off a cliff and land in the ocean. In Animal Crossing, the town is able to have three layers in some cases, causing two cliffs to run through the town.

Using a glitch or a cheating tool such as an Action Replay the player can go on top of the cliff at the north of town. However, as with any glitch or cheat, players should be cautious, as it can cause permanent damage to the game.

In New Horizons, the player is able to climb up and down cliffs using a ladder. The player can also create and destroy them using the Island Designer App.

The cliff at the north of town.

The cliff that runs through the middle of town. 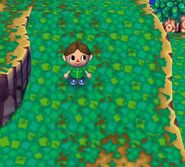 The two tiers of a town are connected by ramps.
This article is a stub. You can help Animal Crossing Wiki by expanding it.
Community content is available under CC-BY-SA unless otherwise noted.
Advertisement