One every few days

Clovers are a type of weed introduced in Wild World and later appearing in City Folk and New Leaf. Like typical weeds, players can pluck them from the ground or dig them out with a shovel. However, unlike weeds, they don't bring negative effects to the village if left alone, similar to dandelions. Clovers vary in color depending on the time of year in the town.

Four-leafed clovers, or lucky clovers, are rare; having an approximate 1 in 40 chance of spawning in place of a regular clover. In New Leaf, they are much more difficult to obtain. When one is placed in a house as furniture, it appears as an open book, with the clover used as a bookmark. It will also act as a lucky item, and give the player 7,777 points towards their Happy Room Academy score. It can also be worn in the player's hair, boosting luck. Four-leafed clovers are traditionally associated with good luck, a superstition that is also voiced by the player.

The player finds a four-leaf clover.

A clover from Wild World 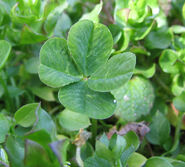