Coffee can be purchased from Brewster once per day. The player will respond to the particular taste and flavoring of the coffee after drinking it.

When a player becomes a regular visitor, Brewster will offer "pigeon milk" which lightens the color of the coffee. Coffee can be bought in other towns from City Folk onwards, whereas this option is not available in Wild World.

In New Leaf, the coffee item can be held like a tool. The player sips from the coffee after pressing A, finishing the drink after five sips. Strangely, due to the fact that the coffee item is technically a tool in this game, it cannot be carried indoors, including The Roost.

In all games coffee has appeared in, it is shown that villagers and some other characters also drink coffee. In New Leaf, several different villagers from the town and other towns that the player has visited may stop by the Cafe to buy coffee, as will other characters such as Tom Nook, Tortimer, and Pelly.

Each character has their own coffee preferences. This information is important when a daily job opens up after six coffees allowing the player to serve coffee to visiting characters.

When serving coffee, coffee beans, the amounts of milk, and sugar spoonfuls can be selected. Some characters specifically request a certain coffee selection and a certain amount of milk and sugar for their coffee. The following info is correct as of New Leaf (and perhaps also New Horizons?).

“Brewster makes what the totally un-chic call "coffee." Trendy folks call it by its real name...le Go Juice.”
― Peppy villager when talked to in The Roost, New Horizons 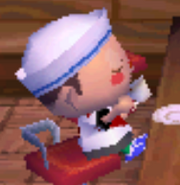 Before drinking coffee in Wild World. 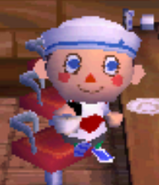 After drinking coffee in Wild World.

Player drinking a coffee to go.

A commentary on the coffee.

Player holding coffee from The Roost.
Community content is available under CC-BY-SA unless otherwise noted.
Advertisement