watch 01:04
What is the Creepy Set?
Do you like this video?
Play Sound 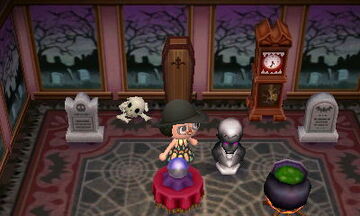 The Creepy set is a set of furniture items in the Animal Crossing series. It first appeared in City Folk as a series when it was distributed as DLC in 2012 in Japan and the United States. It reappears in New Leaf as an event-exclusive set obtainable through giving lollipops to Jack on Halloween.

Retrieved from "https://animalcrossing.fandom.com/wiki/Creepy_set?oldid=427371"
Community content is available under CC-BY-SA unless otherwise noted.