“I better not catch you making goo-goo eyes at my wife, or I’ll make you see in the forth dimension!”

Cyrus (カイゾー, Kaizō?) is an alpaca who appears in Animal Crossing: New Leaf. He works at Re-Tail with Reese, his wife and his business partner. He is the upholsterer and is in charge of altering furniture, but his services are not accessible right from the start. He is first seen sleeping, and any attempts to wake him up will result in scolding from Reese. Cyrus remains asleep until certain conditions are met, but he is always asleep while the train station gate is open and/or there are other players in town.

Cyrus is an alpaca with blue-colored fur and tan skin. His "hairstyle" is similar to the regent wig item, and he wears a blue apron with red stitches and a pink heart on the left. He has 3 freckles on each of his cheeks and has buck teeth. His hooves are black.

Cyrus works at Re-Tail with Reese. However, he will always be asleep until four specific in-game conditions are met.

Cyrus is a playable character in amiibo Festival, available when the Cyrus amiibo is scanned on the Wii U. Sometimes when the player playing as Cyrus lands on an event square in the Amiibo Festival Board Game mode, a random event specifically related to Cyrus may appear.

Cyrus has 6 unlockable costumes for the game, unlocked through leveling up the Cyrus amiibo:

He appears again in New Horizons as a part of the Wedding Season event, along with Reese. If you choose, you may take wedding themed photos with Cyrus and Reese in exchange for furniture and Heart Crystals. Which can be used to buy wedding-themed furniture from Cyrus.

Cyrus is a talented builder who likes reworking furniture. He is fairly aggressive in his speech and warns male characters about interacting with his wife. He uses the catchphrase "squirt", implying that he sees the player as a child. Cyrus is also very proud of his abilities, striking a pose when asked to rework furniture. He can be rather humorous, though.

Cyrus will awaken and provide his services only with the gate closed and no visitors. To use his service, four conditions must be met:

Cyrus is a talented craftsman with an array of refurnishing skills and crafting. He can re-customize most furniture items the player brings to him, but only certain furniture such as chairs, sofas, and TVs are acceptable customized furniture. Cyrus can change a furniture's color, pattern, or fabric design, giving suggestions to the player for customization. For the fabric design (If it's available for that item), Cyrus will ask if you want to use a clothing pattern (He will take that clothing and not return it, as he needs the material for the pattern), custom design, or some of his suggestions. If available, the player can use ore to crystallize certain furniture items.

However, he will not wake up until the player has met each of the four criteria listed above.

Cyrus also has the ability to turn any fossil into a miniature provided the player has a complete collection of that fossil set. Fossil models are a new type of furniture available in New Leaf. They are miniaturized versions of the full fossil sets. While they are not real fossils, regular fossils can be used to make them. These models-sized creatures take up significantly less space than their museum counterparts. Cyrus will offer to make fossil models if the player speaks to him with the completed set in their pocket. Each model costs ten percent of the original set's price to create. Once they are finished, you will be able to display them in your home without having any mass-space losses.

At a cost of 3,000 Bells, he can take any of K.K. Slider's songs and turn it into a special music box housed inside a giant-clam shell (from the beach).

Talking to Cyrus while in a town that isn't your own.

The papers found on Cyrus' desk.

With Reese in the Wedding Season promotional image for New Horizons. 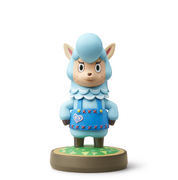 Cyrus' PC Icon
Add a photo to this gallery
Retrieved from "https://animalcrossing.fandom.com/wiki/Cyrus?oldid=457597"
Community content is available under CC-BY-SA unless otherwise noted.