Dōbutsu no Mori+ (どうぶつの森＋[1]), Animal Forest+ in English, is the updated Nintendo GameCube version of Animal Forest, and was released on December 14, 2001, only eight months after the original game. This version contains extra features that had to be left out of the Nintendo 64 version, and also utilizes the GameCube's built-in clock to keep track of the date and time while dropping the Nintendo 64's original system that utilized an internal clock built into the game cartridge. With the use of the GameCube's clock, time passes in the game even when the game is not being played. This led to the game's slogan, "It's playing, even when you're not." Dōbutsu no Mori Plus cost ¥7,140 (around $68 USD) and sold 92,568 copies during its first week of sale in Japan. The new characters from this game are two villagers and the rest islanders.

During the localization process of translating Dōbutsu no Mori overseas as the Gamecube game Animal Crossing, there were many changes incorporated that not only involved immense translation from Japanese to English, but also replacements of many cultural references as well as brand new content, including new holidays, new items and new or altered events. After the success of Animal Crossing, Nintendo of Japan was so impressed with the results of the translation done by Nintendo of America's Treehouse division that they translated NOA's version back into Japanese and released it in Japan as Dōbutsu no Mori e-Plus on June 27, 2003, where it sold 91,658 copies during its first week of sale.

In addition to being an upgraded re-release to the original Animal Forest, there are also many differences between Animal Forest+ and Animal Crossing. 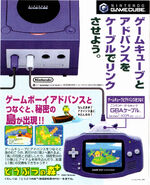 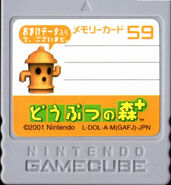 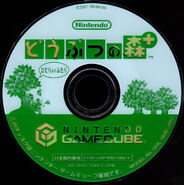 Animal Forest disc
Add a photo to this gallery

Retrieved from "https://animalcrossing.fandom.com/wiki/D%C5%8Dbutsu_no_Mori%2B?oldid=473586"
Community content is available under CC-BY-SA unless otherwise noted.