watch 02:34
Wiki Targeted (Games)
Do you like this video?
Play Sound

Comedy,
Slice of Life
Dōbutsu no Mori: Hohinda Mura Dayori (どうぶつの森 ホヒンダ村だより, lit. Animal Forest: News from Hohinda Village) is a manga series based on the Animal Crossing series series. It is authored by Sayori Abe. An ongoing series, the manga currently has 11 volumes. It is primarily composed as a 4-koma manga, meaning it has multiple 4-panel comics.

Villagers from other villages include Buck of Hafunda, Daisy of Hehinko, Bluebear, Amelia, and Curly of Marinaze, and Static of F1 Four.

Sayorin is the protagonist from Hohinda. Being born on February 25, she is a Pisces. She has medium-length pink hair. She shares a birthday with the author of the manga.

Kotaro is a villager from Hafunda. His birthday is on November 22, making him a Scorpio. He has short black hair. He is named after Fuma Kotaro from the video game Onimusha 2.

Ruiko is Sayorin's best friend; she lives in Hehinko. A Taurus, Ruiko was born on May 7. She also has Type-O blood. She has dark brown hair featuring three braids. Not interested in money, she dreams of becoming a painter.

Chiaki is a girl from Marinaze and is rivals with Sayorin. She was born on March 26, making her an Aries. Additionally, she has Type-B blood. She wears her blonde hair in a ponytail. She is named after the editor-in-chief's wife.

Shige is from F1 Four and is a close friend and rival of Kotaro's. He was born on December 16 and is a Sagittarius; he has Type-AB blood. His village's name is derived from F1 Formula. He was named after the actor Totsugi Shigeyuki.

Haitoku is a resident of Mu and is the smart friend of Shige and Kotaru. Always wearing sports sunglasses, he has surprisingly sharp intuition. Though his house is small, he has over 350 million Bells.

Daniel is a resident of Yudoufu and an American. Born on February 2, he is an Aquarius. He has Type-O blood.

Cover of the first volume.

Cover of the second volume.

Cover of the third volume.

Cover of the fourth volume. 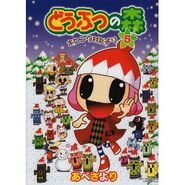 Cover of the fifth volume.

Cover of the sixth volume.

Cover of the seventh volume.

Cover of the eighth volume.

Cover of the ninth volume.

Cover of the tenth volume.

Cover of the eleventh volume.
Untitled.jpg

Retrieved from "https://animalcrossing.fandom.com/wiki/Dōbutsu_no_Mori:_Hohinda_Mura_Dayori?oldid=476196"
Community content is available under CC-BY-SA unless otherwise noted.