Toho (in association with Nintendo)

Japanese
Dōbutsu no Mori (劇場版 どうぶつの森 Gekijōban Dōbutsu no Mori?, The Animal Forest Movie), also known and translated as Animal Crossing: The Movie in English, is a 2006 Japanese anime film adapted from the Animal Crossing series. It was released about a year after Wild World, on which the movie is based. It was directed by Jōji Shimura and was released on DVD. The ending theme, 'Mori e Ikō', was sung by Taeko Ohnuki.

A girl named Ai travels in Kapp'n's cab to Animal Village, a far away town. Kapp'n drops her off outside of the Town Hall, where she meets Pelly and Mayor Tortimer.

Ai begins working for Tom Nook delivering packages to the other villagers. Whilst delivering a box of pies to Alfonso, Ai meets the other human inhabitant of the village, Yū, who is chasing a peacock butterfly. Ai continues her deliveries until the end of the day. Whilst walking home, a spider lands on Ai's forehead, which is caught by Yū. Yū offers her a gift of a cockroach, which she rejects and screams.

The next day, Ai ends up in an altercation with Mr. Resetti after being accidentally pushed into Apollo's flowerbed by Yū. After learning it was an accident, he cools down, and instructs Ai to find Apollo at The Roost. She continues to meet the rest of the villagers, including Margie.

Ai ends up in the museum, where she is startled by the fossil exhibit. Blathers and Celeste appear to calm her down. Ai notices a missing fossil in the exhibit. Blathers explains that it is a missing seismosaur, and Celeste shows her to The Roost. Ai is laughed at by villagers in The Roost for asking about Apollo, until he himself enters, angry about the destruction to his flowerbed. Ai confesses to the damage, and Apollo leaves silently. That evening, Ai discovers a note-in-a-bottle instructing the reader to plant a conifer during the Snow Festival for a miraculous reward.

Some time later, Yū and Alfonso begin a fossil hunt and, along with Ai, Margie and Rosie, discover a cave containing the skeleton of the missing seismosaur. As Yū climbs the rocks, a rockfall starts, and the villagers flee from the cave.

K.K. Slider visits the village and performs K.K. Bossa at Margie's request. Several days later, Rosie reveals that Margie left the village the day after the concert to pursue her dreams of becoming a fashion designer. Ai visits the Roost and begins to cry, and is consoled by Whitney.

More notes-in-bottles appear on the beach with the same message, and during the Snow Festival, Ai decides to plant conifers as the message requests.

Gulliver crashes his ship near the village and requests that the villagers find the missing pieces. Ai, Rosie, Yū and Alfonso return to the cave and meet Margie who had returned to the village for a visit. In the cafe, they find a missing piece of the ship. However, when they return to the village, they discover that Champ had also found the same piece. The piece that Ai found turns out to be a separate alien, who thanks Ai before returning home.

Ai asks Apollo if he is still mad at her. He tells her that he was never mad at her at all.

The conifers that Ai planted during the Snow Festival turn out to form the shape of a star.

In addition to the above, the following characters appear with no voiced lines.

Dōbutsu no Mori was first announced in a May 2006 issue of the online Japanese magazine Hochi Shimbun, with a theatrical release date set for the following December.[1] The movie entered production due to the success of Wild World, released for the Nintendo DS the previous year, which had shipped over 3 million copies in Japan alone. Jōji Shimura was attached to direct, having previously worked on manga-to-film adaptations such as Blade of the Phantom Master (Shin Angyo Onshi?) and Master Keaton. Some of the Animal Crossing series staff assisted with production, and worked to give the movie the same wide audience appeal as the video games themselves.[1]

Those who ordered advance tickets before the film's debut were eligible to receive vouchers which could be redeemed for hard-to-obtain gold tools in Wild World.[2] In October 2007, Nintendo of America made a statement that they had "no plans" to bring the film to North America.[3] However in spite of not having any plans to dub it, fans have dubbed the movie themselves.

Music for Dōbutsu no Mori was contributed by Animal Crossing series composer Kazumi Totaka and arranged by Tomoki Hasegawa, with the film featuring numerous themes from the games. The film's official theme song is "Mori e Ikō" (森へ行こう Let's Go to the Forest?) by Taeko Ohnuki, which plays over the end credits.[4] An official soundtrack album was released in Japan on December 13, 2006 by VAP containing 46 tracks from the movie along with five bonus songs from Animal Crossing: Wild World.[5]

Dōbutsu no Mori was released theatrically in Japan on 16 December 2006 where it was distributed by Toho. It debuted in Japanese theaters as the third highest-grossing film of its opening weekend behind Letters from Iwo Jima and Eragon, earning approximately ¥246 million ($2,085,729).[6] By the end of 2006, the movie had a total revenue of ¥1.526 billion ($12,915,432), becoming the 30th highest-grossing film that year in the region.[7] The film had lifetime earnings of approximately ¥1.7 billion ($16,216,731) by the end of its theatrical run in 2007, making it the 17th highest-grossing film of that year when combining it with its December 2006 box office total.[8]

Dōbutsu no Mori was released on region 2 DVD in Japan on July 25, 2007 by VAP.[9] First-print copies also included an Animal Crossing-themed carrying pouch.[9] 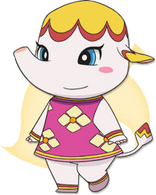 Hopper fishing in the spring

Rosie in her maid outfit

Cyrano and Cesar at The Roost

Rosie in her play outfit

Cyrano at the beach

The main trio in their bathing suits

Whitney at the beach

Hopper catches a boot in the summer

Whitney in her kimono

Cyrano falls into a pitfall

Hopper fishing in the fall

Rosie in her winter outfit

Some of the cast in their winter outfits

This takes place during the credits on the end of the movie, Possibly given to Bianca by Apollo 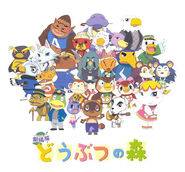 Another one of the movie's many posters

A calendar based on the movie

Picture of the DVD cover. 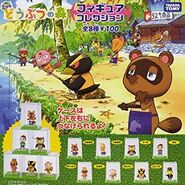 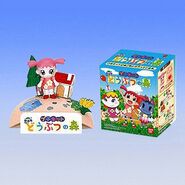 Candy Used to push the film 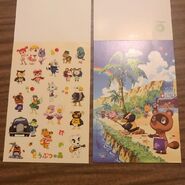