This article is about how to dive. For the list of deep-sea creatures in New Leaf, see Deep-Sea Creatures.

Diving is a feature introduced in New Leaf. It is one gameplay element which involves collecting for the town Museum, with the others being; fishing, bug catching, fossil hunting and art collecting. Diving is the only way to collect deep-sea creatures.

Diving was revealed to be a feature of New Horizons in the June 22nd, 2020 Summer update Wave 1 trailer.

Diving is limited to the ocean. The player cannot swim or dive in ponds, rivers or waterfall ponds.

The Wet Suit is an item of clothing which must be worn in order to swim and collect deep-sea creatures. It is not obtainable at the start of the game, and can be bought from the island shop for 40 Medals or rented from Lloid. The rented wet suit, like any other tool, is taken from the player once they leave the island or go on a tour.

Unlike tools, which have better silver and golden counterparts, wet suits have no "better versions", but they can be bought in different colors.

Once the player has entered the water and enough time has passed, deep-sea creatures will begin to appear. They come in a variety of different sizes, and travel at different speeds. All deep-sea creatures appear as dark, round shadows underneath the water expelling bubbles up to the surface. These shadows indicate the size of the creature. The player themselves appears as a shadow when underwater, and is bigger than any of the deep-sea creatures. When the player finds a creature there will be an exclamation mark above their head, indicating that a creature has been caught. While diving for creatures live jellyfish will also be in the ocean and can sting the player if approached too closely.

Some deep-sea creatures will move when approached and require the player to dive above them or swim under the water after them. If the player is not quick enough, the creature may swim beyond the perimeter the player can go or it will simply disappear.

When certain conditions were met, the player could swim without a wet suit. This could be done by performing the river glitch on the cliff edge instead of a river edge. The player would trip and fall into the ocean, and begin swimming without having put on a wet suit. This glitch was patched in the Welcome Amiibo update.

Diving was revealed to be a feature in New Horizons in the June 22nd, 2020 Summer Update Wave 1 Trailer.

Equipping a Wet Suit is required in order to be able to dive; note that the snorkel clothing accessory also introduced by the Wave 1 Summer Update is merely cosmetic, it is not required for diving and has no bonus effects of any kind if it is equipped during diving. Wet Suits can be purchased from Nook's Cranny or the Special Items tab of the Nook Shopping app in the Nook Stop for 3,000 Bells each. Wet Suits from Nook's Cranny or Nook Shopping have four color variations each and rotate daily. A unique Nook-themed Wet Suit with long sleeves, can also be purchased with 800 Nook Miles from the Nook Stop.

Wet Suits are equipped like clothing, but the player does not need to remove their base outfit in order to put on, while it wearing one visually overrides what is worn in the Tops, Bottoms or Dress-Up category. Wet Suits have unlimited uses and cannot be registered in the Tool Ring or a Wand. While the player is wearing a Wet Suit, they cannot put on any other clothing or use the dressing room at Able Sisters. If the Wet Suit is the player's base outfit, the player can equip a wand outfit over it.

On any deserted island or mystery tour island, players can dive into the ocean from cliffs, the beach, rocks, or perform a flip off the Pier in order to retrieve deep-sea creatures. The player can dive into the ocean off any level of their island so long as its near the ocean. The player can move at a slightly increased speed in the water by tapping the A button. Diving is performed by pressing the Y button. The player is able to stay under water for several seconds before being forced to come up to the surface; the water will bubble when this is about to happen. The player can do a flip off of the Pier by running with the B button and pressing the A button.

The player can swim in the ocean indefinitely, with this being a minor change from New Leaf which forced the player to return to land if they stayed out for too long. The player can also swim and dive during multiplayer. In another change from New Leaf, deep-sea creatures cannot be scared away or escape from the player by moving outside the map boundary, since the netting now extends below the water's surface. In addition to deep-sea creatures, the player can now retrieve pearls which are valuable items that can be used to craft the Mermaid set.

While swimming, but not while diving, the player can still access their NookPhone, inventory, and reactions. While inventory can be accessed, the player cannot use any of the items or tools in their inventory until they return to shore. In order to dispose of any unwanted sea creatures the player must swim to shore. If a Scallop is found with a full inventory an interaction with Pascal will not occur. Therefore, having two slots open in the player's inventory will give them enough room for a potential DIYs or Pearls. The player can also dive while Island Designer mode is active, but no landscaping ("terraforming") tools can be used while in the water. Snorkel masks are not required and do not change the speed in which the player is swimming.

Deep-sea creatures can only be found in two locations. The first is the ocean surrounding the player's town and the other is the sea surrounding the Island, known as the tropical seas or "island ocean".

The tropical sea is the body of water that surrounds the Island. Similar to the ocean, fish will also inhabit the water. Some deep-sea creatures are exclusive the to tropical seas, such as the Spotted Garden Eel, Giant Isopod and Chambered Nautilus.

Similar to fish and bugs, the deep-sea creature collectables come in different types. 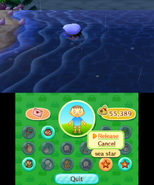 Display menu when swapping a deep-sea creature with another item in the player's pockets, New Leaf
Community content is available under CC-BY-SA unless otherwise noted.
Advertisement