Dodo Airlines Themes
Dodo Airlines is a building and service in New Horizons which allows players to visit other islands or send mail. It is operated by Dodo Airline's employees, Orville and Wilbur. Along with Resident Services, it is one of only two buildings present on the Deserted Island at the beginning of the game. The airport location is permanent and cannot be moved.

The building functions similar to a Train Station from past games, where the Player can go to other player's islands, or invite people to come into their own.

Upon arriving to the Deserted Island, the Airport is shown as the airplane icon on the Map of the island, and the player will be able to enter it, but Orville will explain that the Player cannot use the services it offers yet. The Airport will be unlocked for the player to use on the second day after Tom Nook's morning announcements.

The player may also go on mystery tours by using a Nook Miles Ticket. These can be obtained at the Nook Stop for 2,000 Nook Miles. This will take them to an island that contains trees, bugs, fish, and items that may not be accessible on the player's island. Some islands have special properties and may contain bamboo, and rare bugs or fish.

The airport later allows players to travel to Harv's Island (Photopia), where the player can take photos with villagers currently occupying their island or characters summoned via Amiibo. If the player has the "Happy Home Paradise" paid DLC and leaves the archipelago, the player can now have the option to travel to Harv's island without having to go to the airport on their home island. However, if the player is still on the archipelago past 5 AM, the player needs to go back to their home island first to tune in to Isabelle's announcements for the day from the player's island's Resident Services.

It also doubles as a post office, allowing the player to send letters via a card stand. When the card stand is accessed, the player can choose between multiple designs for their letter. Some of the letter designs are marked with "Limited Availability" and will only be valid for purchase until the dates listed on them. Sending a letter costs 200 bells, and they can be sent to a current resident of the player's island, their future self, or a player from another town who is on their friends list (via the Online Service).

After a certain amount of visits with Dodo Airlines, when talking to Wilbur, he will tell the player about delivery and liquidation services. Wilbur can deliver items from your pocket directly to the player's home storage that can be stored. The player can also sell items to him for the same price equivalent to using the Nook's Cranny drop-box. The bells will be deposited in your bank the next day.

After flying with DAL after multiple flights, the player can receive different gifts based on the amount of flights and "points" they gain with Dodo Airlines. There are a total of 11 gifts with only one of them being customizable. These include DAL Tee, DAL Eye Mask, DAL Slippers, DAL mug, DAL Apron, DAL Cap, DAL Umbrella, DAL backpack, DAL Pilot Jacket, and DAL model plane.

As in previous titles, the player can invite other players locally and over the internet. However, New Horizons adds a new option, called Dodo Codes. Dodo Codes are five-character passwords which allow other players to visit the island, even without having to be friends on the Nintendo Switch. The maximum number of people that can be on one island at once has been doubled from four in New Leaf to eight.

A few things have been changed in comparison with New Leaf:

Actions that cannot be performed with an open gate

Actions that cannot be performed with visitors on the island

Other gameplay changes with visitors on the island

Another view of the Exterior of a Blue Airport

Orville next to the Card Stand in Dodo Airlines 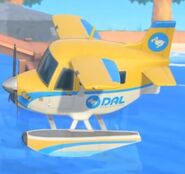 The Airport is shown as the airplane icon on the Map.