Dotty (マーサ, Māsa?, Martha) is a peppy rabbit villager in the Animal Crossing series. Her name relates to her large, circled eyes and area of her ears. She shares her initial phrase with Ellie.

Dotty is a black and white Dutch Rabbit with tall ears that are turquoise inside. She has a smile by default along with round eyes that go red when she is surprised or shocked. Her paws are white (known as "white socks") while her arms are black. Her stomach and legs are nearly white, with grey marks on her legs. She initially wears a Blue Check Shirt when she first moves into town.

In Animal Forest and Animal Forest+, Dotty's house has a mixture of furniture from the Construction Theme and the Space Theme, including Space Station and the Traffic Cone. There is one Gyroid, which is the Mini Spuntoid and a Tape Deck that plays K.K. Technopop. The Wallpaper is the Western Vista and the flooring Tropical Floor.

From Animal Crossing to Animal Forest e+​, her house has the Tropical Vista (wall) and Tropical Floor. The Moai statues decorate the center of the house and in the corners, she has a toilet and alarm clock. Her Tape Deck will play Aloha K.K., giving off a Hawaiian theme.

In Wild World and City Folk, Dotty's house has a Space Theme, but also includes the Desert Vista (wall) and Saharah's Desert (floor). Her decor consists of three Spaceman Sams, a Lunar Rover, a mochi pestle, and a Space Station. She listens to K.K. Technopop on her stereo and has one gyroid - the Tall Sproid.

In New Leaf, Dotty's house contains a mixmatch of modern and glossy, with furniture such as the Modern Bed and a couple of pieces from the Sleek Series, such as the table that has a stereo on top that plays K.K. Technopop, lamp, and the side table. Other furniture pieces include the Shower Stall, a Pachira, Cream Sofa, a dresser, and a concert light. She has the Stripe Wall and the Sleek Carpet as her choice of flooring and wallpaper.

She wants to be a star, and she's not particular about what field she makes it big in. Singing, acting, sports— the important thing is that everyone knows her name!

At level 7 friendship, she will reward you with a blue-check tee and sparkle stones (x1).

At level 10, she will request that you craft a reversi piece.

At level 20, she will reward you with pic of Dotty and sparkle stones (x1).

The player meeting Dotty.
Add a photo to this gallery

Dotty moving into a player's town.

Dotty joyful about moving into a town.

Dotty talking to the player.

Dotty complaining to the player after getting trapped in a pitfall.

A player visiting Dotty in a dream town.

Dotty's picture in New Leaf.
Add a photo to this gallery 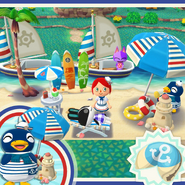 Dotty is featured in this playset, along with a Kiddie Table and a Regal Vanity.
Add a photo to this gallery

Retrieved from "https://animalcrossing.fandom.com/wiki/Dotty?oldid=418009"
Community content is available under CC-BY-SA unless otherwise noted.