In the GCN games, the dump is a large enclosed space found outside, typically in one of the northern acres. After being emptied, several random items are generated that the player can take as desired.

The dump is automatically emptied at 6 am every Monday and Thursday. After emptying 2 or 3 items are randomly generated, which may include clothing, stationery, furniture, or umbrellas.

The dump provides a way for the player to dispose of trash and other unwanted items without affecting their perfect town rating. 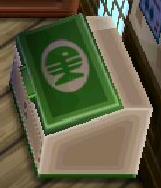 The dump was replaced by the recycling bin in Wild World and City Folk. The recycling bin is found inside the Town Hall, on the right side. Like the dump in previous games, the bin is emptied at 6 am every Monday and Thursday, at which point several new items will generate. Some items include furniture that neighbors have thrown away after remodeling their house. Pitfall seeds may also appear in the recycling bin.

As with the dump, trash tossed into the bin offers a means for players to dispose of trash without negatively affecting the town rating. In Wild World, the bin holds the standard fifteen items, like the player's bag, while in City Folk, it only holds twelve.

Although the dump and recycling bin did not appear in New Leaf, a trashcan can be built through public works projects. This trash can however instantly disposes of items permanently as soon as they are thrown in. It does not generate free items like in previous games.

The recycling shop, Re-Tail, shares similarities with the dump feature, letting players place furniture and other items for free. These items can then be bought by villagers. Trash fished out from the river can be disposed of by talking to Reese, at a cost of 80 Bells. Other forms of trash, such as rotten fruit or used fireworks, require a disposal fee equivalent to their respective sell prices.

The fence public work project can substitute as a miniature dump, as players are able to place items within its boundary. However, it does not empty or generates random items like the feature from GCN games.

In New Horizons, the "recycling box" is located inside Resident Services. Various items may appear in it over time following certain events. When the box becomes full, the oldest items are discarded to make room for new items. The player can take any items from the box that they want.

In party play mode, any item picked up by the secondary player character will appear in the recycling box to be claimed once the session is over.