Tortimer
Isabelle
Redd
In the Animal Crossing series, Fireworks Shows appear during certain events. In Animal Crossing, the Fireworks Show was called Bonfire Night. During a Fireworks Show, fireworks can be seen flying into the sky in the background and exploding in different colors, lighting up the ground and the inside of homes (when inside). During a fireworks show, there is no rain and the sky will always be clear. There is certain music that accompanies a fireworks show, which can be described as fairground music. Tortimer, the Mayor, can usually be found in front of the Town Hall giving away Roman Candles, sparklers, party poppers or fountain fireworks during firework shows, while giving some information on the festivities.

There are different events which include fireworks, usually revolving around events in reality which involve them.

In Animal Crossing, fireworks can be seen in the lake on the 4th July, which coincides with American Independence Day. Animal Crossing, however, celebrates the opening of the train station. They also appear during New Year's Eve, to celebrate the end of the year and the beginning of a new one.

Fireworks seen in the River Pool

In Wild World, the fireworks for Independence Day for America was removed, and a new event which happens every Saturday in August at 7:00pm takes its place called the Fireworks Show. During the Fireworks Show, Tortimer will be outside the Town Hall. Talk to him to receive either a sparkler or a Roman candle. Tortimer will usually only allow the player to receive two of each items a night. Although if the player pesters him long enough, he might give them more. Both sparklers and Roman candles are equitable items. Once equipped to the character, the player can use the item. Both objects shoot out sparks. Tortimer may also give the player a fortune for the night. Fireworks still appear during the New Year's celebrations.

Fireworks in the night sky.

In City Folk, the fireworks show takes the same role as in Wild World. During a Fireworks Show, villagers can be seen and heard, clapping at the fireworks while looking into the sky. Instead of taking place every Saturday like in Wild World, Firework Shows are held every Sunday in August. About a week before the show, an announcement will be written on the bulletin board about Sunday being the fireworks show.

Using a Roman Candle during the Fireworks Show

Fireworks in the night sky.

In New Leaf, the fireworks show takes the same role as in Wild World and City Folk, appearing every Sunday in August, from 7:00PM until Midnight. During a Fireworks Show, villagers can be seen and heard, clapping at the fireworks while looking into the sky. They often make remarks about the fireworks. Isabelle hosts the event in the plaza, and hands out gifts such as boppers and firework fountains. Redd hosts a Cookie Stand to the right of the plaza, players can purchase a Redd's Cookie from him for 500 bells a piece.

New Leaf also takes a new turn in the Firework Show. If the player talks to Isabelle anytime before the show starts, she will ask if the player has any custom designs (these can be made at the Able Sisters Shop) they wish to have light up in the air for the show. The player may enter more than one, however changing the design in any way will result in the firework changing as well in the future.

Isabelle at the Fireworks Show near Redd's Cookie Stand in New Leaf.

Fireworks Show with a standard firework in New Leaf

An example of a custom image firework in New Leaf.

Isabelle and Redd setting up the fireworks

Tom talking about the Fireworks show.

In New Horizons, the Fireworks Show was added in the 1.4.0 Summer Update (wave 2) on July 30, 2020. The event is available every Sunday evening in the month of August, starting at 7:00 PM and ending at 12:00 AM. During a Fireworks Show, players can custom design their own fireworks, and win raffle prizes from Redd from Redd's Raffle, such as sparklers, bubble blowers, pinwheels, fireworks, balloons, etc. Each of the thirteen raffle numbers from Redd's will grant the player a different item. The uchiwa fan, pinwheel, and tweeter come in one variation and have unlimited uses. The bubble blower comes in packs of five (up to 10 per space in the player's pocket) and will consume one pack each time the player blows bubbles. The sparklers are similarly limited-use, but only come in packs of one. Lastly, the fountain firework is the only item that is labeled as used once it’s lit and can be thrown away or sold afterwards.

Alongside the prizes from Redd’s Raffle, Isabelle will give out one of four head boppers if spoken to during the event, and will give a different design each time the event is held on the player’s island. She will also give boppers to each player that resides on the island, as well as to visitors visiting during the event. Isabelle can add a sequence of custom designs to use as fireworks if spoken to after receiving the bopper. During the day of the Fireworks show, Isabelle’s normal services inside the Resident Services building are not available, as she is present outside the building for the entire day.

Villagers will not sleep during a fireworks show if they are actively participating in it. This only applies to Lazy villagers as that they are the only villagers that sleep before 12 AM.

In the 1.11.0 Free Update on July 29th, the event returns for 2021 with the addition of Cotton Candy, Frozen treats and Boba drinks. These again can all be obtained from Redd's Raffle. 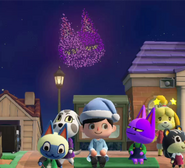