Animal Crossing Wiki
Register
Don't have an account?
Sign In
Advertisement
in: Articles in need of cleanup, Image requested, Fish,
and 4 more

This article is about fish in general. For the action of catching a fish, see fishing.

Fish are a number of collectable items in the Animal Crossing series. Players can catch them using a fishing rod. They can be donated to the museum to fill up the aquarium, sold to Tom Nook/Reese, or placed in the player's home inside of a Fish Tank, like a piece of furniture. However, only small fish tanks will be able to placed on top of furniture (e.g. A Table). Larger fish tanks must be put onto the floor. A large amount of fish emerge during the summer, a few unique species will emerge in autumn and spring, and there are almost none during the winter. Some villagers in City Folk will ask the player to try and catch a certain fish, and upon doing so, they will give an item to the player, which could be anything from an article of clothing to a piece of furniture.

In the series there are six different sizes of fish. Each fish is limited to its own shadow size. Sharks and sunfish are unlike other fish shadows because they show a fin in their shadow.

In New Leaf, there are now various catch sizes of each fish that can be kept track of and recorded into an encyclopedia. Every time the player catches a fish that is bigger than the original record, it will be overwritten. However the shadow size for each type remains the same, no matter how big or small the resulting catch size is. 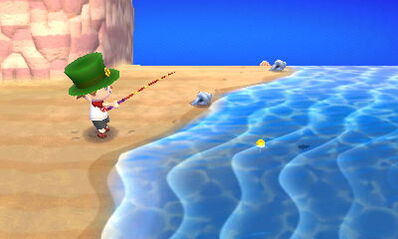 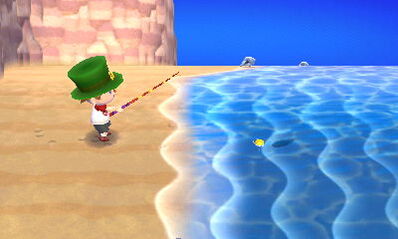 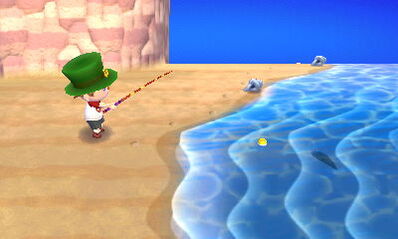 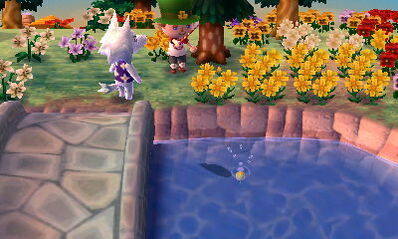 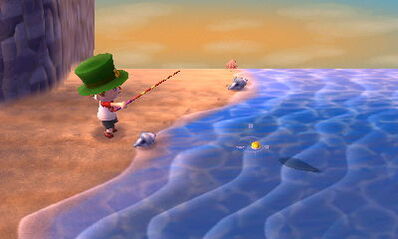 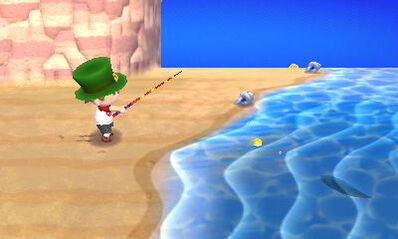 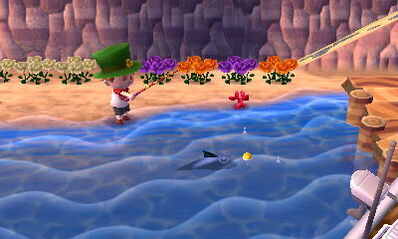 A huge fish with a fin.

Fish in Each Game

In Animal Forest, there are 32 species of fish obtainable. The coelacanth is the only fish that can be caught in the ocean.

In Animal Crossing, there are 40 species of fish obtainable.The herabuna from Animal Forest and Animal Forest+ has been replaced with the brook trout. The crawfish, frog, killifish, jellyfish, sea bass, red snapper, barred knifejaw, and arapaima were added.

In City Folk, a total of 64 fish are obtainable. No fish were dropped. New fish include the pike, neon tetra, surgeonfish, butterfly fish, napoleonfish, lobster (fish), moray eel, and ray. The placement of fish in this game is evened out. In City Folk, 37 fish are freshwater and 27 are saltwater.

Below is a list of the fish in the mainline series based on appearances. Images are based on most recent appearance.