This article is about a tool. For the jock mouse villager, see Rod (villager).

"I got the Golden Rod! I've got some fishing to do!" —Animal Crossing (GCN)

Fishing rods are a type of tool in the Animal Crossing series. They have appeared in every game and are used when fishing to catch fish in any body of water in the town.

A fishing rod is the only tool capable of catching and collecting fish, which are recognized as dark fish-shaped, shadowy silhouettes of fish seen swimming underneath the surface of different bodies of water. These are: oceans, rivers, holding ponds, tropical seas, and waterfalls, all holding different types of fish.

Fishing rods are used by standing near water and pressing the A Button, which will cast a line into the water. If a nearby fish spots the lure, they will approach it and nibble the line a maximum of four times before biting on the fifth. When the fish bites the line they will create a splash, and the line must quickly be reeled in by pressing the A Button before the fish swims away and disappears. Fish will be scared away by reeling in the line too soon, running, knocking balls or snowballs into the water, or using other tools near the fish.

Below is a list of rods in Wild World.

Below are the fishing rods available in City Folk:

Below are the fishing rods available in New Leaf:

The player owns a fishing rod by default that they use at Saltwater Shores and Lost Lure Creek. During Fishing Tourneys, it is possible to rent a Golden Rod using 80 leaf tickets. A Golden Rod allows the player to always catch two tourney fish at once and remains available for the rest of the event.

Below are the fishing rods available in New Horizons: 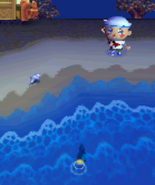 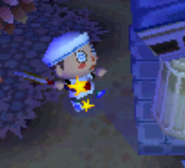 Trying to fish out of water.

Tortimer giving the player the golden rod in City Folk

A player after receiving the golden fishing rod in City Folk

Celeste talking about the silver rod on display in New Leaf 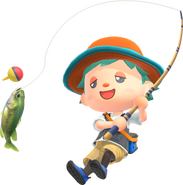 A player with a fishing rod in New Horizons

A player breaks a fishing rod in New Horizons