This article is about a type of flora. For the rhino or cow villagers, see Petunia.

For the cat villager, see Rosie.

For the frog villager, see Lily.

For the gorilla villager, see Violet. 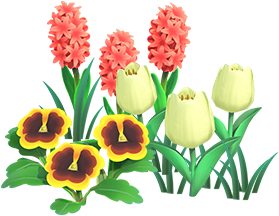 AF, AF+, AC, AFe+, WW, CF, NL, NH
Flowers are plants that appear in the Animal Crossing series. They will randomly generate throughout the town once a new save file is created. They can be planted either by players or villagers, although some special flowers only occur when specific criteria are satisfied. Flowers will grow throughout the year. They serve a variety of purposes, such as attracting bugs and developing a perfect town status. They can also be placed in a house as furniture or be worn by the player.

Flower seeds can be purchased from the Gardening Store or Tom Nook's store. Once grown, they can be transplanted, worn as accessories, used in home decor, or given as gifts.

In Wild World, City Folk, and New Leaf, wilted flowers become dull brown and are destroyed if picked, but can be restored if watered with a watering can on the same day as they wilt. Flowers will slightly brighten up upon watering; precipitation will also revive flowers. They will not wilt if the Beautiful Town ordinance is in effect.

Many bug species only occur adjacent to flowers, including ladybugs, snails, mantises, bees and certain butterflies. Until New Leaf tulips did not attract any bugs. Three bugs, peacock butterflies, orchid mantises, and tiger butterflies, are attracted only to specific colors of flowers. For instance, the peacock butterfly appears only when blue, black, or purple flowers are present.

The related dandelion, a variety of weed, attracts only orchid mantises. However, they can spawn on any white flower.

* Must be wilted before New Horizons.

Jacob's Ladders/Lilies of the Valley

When the environment of a town reaches a perfect level (or 5 stars in NH), the Jacob's ladder flower grows usually on the edge of a cliff. It is a rare and desirable flower. In growing hybrids, placing Jacob's ladder next to parent flowers increases the chances of germinating a hybrid.

A dandelion appears randomly, and although essentially a weed, it does not affect town status. It is brighter and fuller in appearance than yellow cosmos. After a few days, dandelion flowers turn white and become puffs which can be held and blown away by the player resulting in the seeds floating away and disappearing. Puffs do not re-seed.

The rafflesia is a large, red plant growing in the player's town when a large number of weeds accumulate. Its appearance means the town is at the lowest rank. The real-world rafflesia is notorious for its smell: in the Animal Crossing series, this is represented by the presence of flies attracted by the rotting odor.

Plant flowers of the same type either side-to-side or diagonally. The next morning, a new flower may occur adjacent to one of the parents. Neither germination nor the occurrence of a hybrid color are guaranteed, as only 3-5 new flowers appear each day and hybrid colors occur less frequently than standard colors. As of New Horizons, there is no limit to how many new flowers can spawn per day.

Player with all flower types