This article is about Franklin. For the villager, see Frank (eagle).

Franklin (フランクリン, Furankurin?) is a turkey character that appears during the Harvest Festival. He has appeared in almost every game except for Animal Forest, Animal Forest+ and Wild World, which did not include multi-national events.

In his first appearances from Animal Crossing to City Folk, he appears skittish and paranoid during his visit to the town, and can be found hiding behind objects. He wears a yellow hat with yellow overalls. In New Leaf, he takes a more formal role during the Harvest Festival. He wears a chef's hat and overalls.

He was confirmed to appear in New Horizons after the September 30th Autumn update trailer.

Franklin is a turkey, and his head is believed to be featherless. He has lavender eyelids and blue pupils with a gray rim around it. The rim of his eyes is magenta, and he also has a magenta snood. His beak is lavender, and he has gray wings with white tips. He has magenta feathers near the bottom of his neck, and pink talons. He wears the classic chef's uniform, with a chef's hat, brown buttons and a yellow apron. 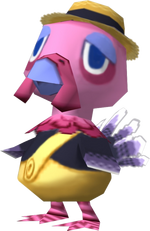 During the Harvest Festival, Franklin will hide behind obstacles. In City Folk he hides behind objects such as trees, signs and buildings, and in the GCN versions of Animal Crossing he only appears to hide behind trees, villager houses and the museum. He stays hidden until the player shows up with pieces of silverware from the banquet table, but on each visit he will continue to fear that the player may turn on him and he will find a new place to hide once they get far enough away from him. He also mentions that Tortimer sent him a letter asking if he would like to join for the festival, oblivious to the fact in which he would be the main course.

Franklin believes that if the player pilfers the silverware, the villagers will be unable to serve him as the main course for the festival. For each piece brought to him, the player will receive one piece of the Harvest Series, including the wallpaper/carpet. At first he will give you pieces you have not yet obtained, but once the player has picked up all the pieces he continues to award random items from the set.

If the player talks to any of the villagers during the Harvest Festival, they'll occasionally discuss sightings of a 'suspicious guy' or 'crazy dude' and state which letter or number acre row he was seen in. This information is released on the introduction, and the player is not required to choose the talk option to learn of the hints.

Franklin is unusual among Animal Crossing residents and visitors in that he is entirely static. Unlike the other visitors, such as Saharah or Joan, he does not walk around the town. Instead, Franklin will appear in his hiding place and will disappear soon after the player moves the camera out of view. He will then reappear instantly in a different hiding place, so that sometimes it can appear that he has jumped ahead of you somehow. Some players may be able to tell when Franklin disappears, as there can be a slight shudder to the screen as the game reloads and puts him in a different place. While in one hiding place, Franklin will only accept one 'knife and fork' set, so if you wish to give him another the player must move away from the hiding place until Franklin disappears, and search for him again.

In New Leaf, Franklin can be found in the Plaza. When approached by the player, he will introduce himself and tell them he is going to be cooking for Harvest Festival, which contrasts to his suspicious behavior in previous games.

Once the player has given him the items he requires, he will make his dish which will appear on his table. The food on the table is not edible. As a reward, he will give the player an item of furniture from the Harvest Series. If the special ingredient is brought for all four dishes, the player will receive a cornucopia.

Franklin will make four dishes in total. These are usually a salad, a soup, a main dish and a dessert. Once all of the dishes have been made, Franklin will express his gratitude and give the player one last piece of Harvest furniture. There is no finale where the villagers gather to eat the meal, but it may be implied.

Franklin was confirmed to appear in New Horizons during the September 30th Autumn update trailer, along with Jingle. Similar to New Leaf, Franklin will have the player assist him with preparing the feast. The holiday is now referred to as Turkey Day instead of the Harvest Festival. The dishes consists of clam chowder, pumpkin pie, gratin and fish meunière.

The player can assist Franklin in preparing four meals for the Turkey Day feast. The player can either collect the ingredients on their own, or trade for ingredients with other villagers. As in New Leaf, there is one secret ingredient for each dish.

Upon completing each dish, the player will receive a Turkey Day DIY. Turkey Day DIYs are available to buy from Nook's Cranny from the day after Turkey Day until the end of November. They can be customized from Autumn orange colors to Spring green colors, to accommodate players from the Southern Hemisphere who experience Turkey Day in the Spring.