Animal Crossing Wiki
Register
Don't have an account?
Sign In
Advertisement
in: Articles in need of cleanup, Under construction, New Horizons,
and 2 more 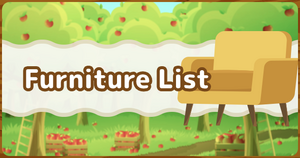 In New Horizons, furniture can either be crafted on the workbench, bought from Nook's Cranny, or ordered from the Nook Stop catalog. Furniture may also be found by shaking trees or by obtaining balloon presents, though the items are always random. Island residents may also give the player furniture.

Furniture can now be placed outside on terrain, including the beach, and is moved in half-square increments like in Happy Home Designer and Pocket Camp.

Furniture can be used to improve your island rating, and can also be traded to friends.

Due to the page length, it has now been broken down into smaller pages.

Furniture may have several variations that will show up in the player's catalog at the Nook Stop. Many furniture items have variations that cannot be customized and must be found or bought to obtain. Variations of crafted furniture are considered both a variation and a customization option since the variations are unobtainable except through customization. Some furniture may have a non-customizable variation, but another part such as the design or pattern on the item is customizable. Customization that can include a custom design is not considered a variation and will not show up as such in the player's catalog, even the included presets.

For images of variations and customization options, see the individual item pages.