View source
watch 02:40
World of Warcraft: Dragonflight - The Loop
Do you like this video?
Play Sound

"GAAAAH! I got a giant isopod! It's the crustodian of the sea." —New Horizons

The giant isopod is a rare, benthic aquatic life form found at the bottom of the ocean in New Leaf and New Horizons. Diving is the only way to obtain it.

"Giant isopods are related to pill bugs, and they can grow up to 20 inches long. They are scary looking but still come across as humorous for some odd reason. Despite their roly-poly builds, they are surprisingly fast swimmers, making them rather agile. They have big appetites, gaining the title "sea cleaners" mostly because they eat dead fish on the seafloor."

In New Horizons, upon donation or selecting "Tell me about this!", Blathers will say:

"Growing up to nearly 20 inches, the sea-dwelling giant isopod is the world's largest cousin of the pill bug. Twenty inches?! Twenty times as revolting, I say! Making matters worse for those of us who find the pill bug repulsive rather than "cute"... The giant isopod can swim shockingly fast and is known for its voracious appetite. In fact, it's most happy when dining on the carcasses of animals that have sunk to the bottom of the sea! This behavior has earned it a nickname... 'the vacuum cleaner of the deep.' Why must nature play such awful pranks on me?"

Giant isopods can be any number of twenty separate species of large isopod but often refer to the largest isopod, Bathynomus giganteus. They live mostly in deep, cold regions of the Atlantic, Pacific and Indian Oceans. Their discovery by French Zoologist Alphonse Milne-Edwards played an important role in proving that the deeper regions of the sea were not lifeless as was assumed at the time in 1879. The reason for its size is attributed to 'Deep Sea Gigantism' a phenomenon where living things tend to grow larger the further from the surface of the ocean they get. Some scientists believe it is so to deal with immense pressures of water above them, but the reason is still a mystery. 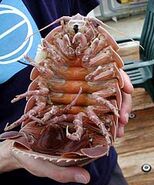 A giant isopod in real life.