Gladys (ちとせ, Chitose?) is a normal ostrich villager in the Animal Crossing series. Her name is based around her personality; a neutral name that is unlike the other personality type villagers, which all have names relating to their species and character. Her initial phrase, "stretch," is a play on her species, which are known to have long necks. She first appeared as a new character in Animal Forest e+, a Japan only game, and was brought back to Wild World, City Folk and New Leaf. She appears on the album cover for K.K. Rockabilly.

Gladys is a female crane with large black eyes and a circular, crimson crest atop her head. The upper part of her face, wings and abdomen are white, while the lower part of her face is a dark gray. She has horizontally-striped legs alternating between two shades of grey. Her initial shirt is the Misty Tee. Her appearance seems to be based on the red-crowned crane which is supported by her initial clothing, though there is the unlikely possibility that she is a whooping crane. In Animal Forest e+, her eyelashes are slightly shorter than in later games.

Gladys has a normal personality, and frequently acts kind towards the player. Normal villagers generally get along well with lazy, peppy, smug, snooty and other normal villagers. Gladys may conflict with cranky and uchi villagers. As a normal villager, Gladys will usually wake up at 6:00 am and is easier to befriend than most. Both normal and peppy villagers reference an unseen friend known as Moppina.

Gladys' house in Animal Forest e+ has a Japanese feel to it. She has many Exotic items, such as the bench, the bureau, the table, the chest, and the screen. Gladys also has three gyroids, and a pet bird. She has no stereo at first, but if she is given one, it will play K.K. Folk. Her floor is the Tatami, and her wallpaper is the Modern Screen.

In Wild World, and City Folk, Gladys' house still has a very Japanese feel. She still has all her previous Exotic items, plus the bed, as well as more bonsai. She also has a Phonograph that plays K.K. Folk. Her flooring is still the Tatami, but her wallpaper has changed to the Shoji Screen.

Gladys' house in New Leaf still has a Japanese feel, but it has changed a bit from the past games. She now has less Exotic items, since the only one she has left is the Exotic Screen. Instead, she now has other Japanese items, such as the paper lantern, the biwa lute, and the Tokonoma. She displays a bonsai, and a phonograph playing K.K. Folk on top of her Glass Top Table. Her flooring is once again the Tatami, but her wallpaper has changed to the Tearoom Wall.

She's an accomplished weaver who'll make you anything you want if you ask nicely. Just don't ask for a scarf if you don't want a blanket.

At level 7 friendship, she will reward you with a misty tee and sparkle stones (x1).

At level 15, she will request that you craft a loom.

At level 20, she will reward you with pic of Gladys and sparkle stones (x1). 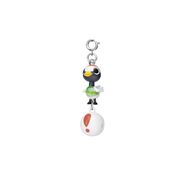 Gladys' e-Reader card.
Add a photo to this gallery
Retrieved from "https://animalcrossing.fandom.com/wiki/Gladys?oldid=398834"
Community content is available under CC-BY-SA unless otherwise noted.