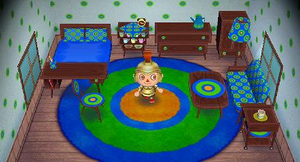 Gracie's Series appears in both City Folk and New Leaf. It can be obtained during summer at GracieGrace in City Folk (T&T Emporium in New Leaf). It is the most expensive set available from Gracie. The price is 2,436,000 Bells (1,582,000 with the DLC in City Folk) for the full set, including carpet and wallpaper. The furniture features Gracie's trademark pattern of green and orange circles on a blue background. Gracie's Series can be bought from June 1st until July 31st. In New Leaf, some pieces can be gained from Gracie during her fashion-check challenge before she opens her store, if the player passed with high approval from her.

Some villagers in New Leaf own pieces of this series. Mint owns the chest, Robin owns the bench and chest, and Moose owns the table and bench.

All of the Gracie's Series items are listed below: 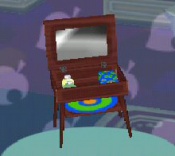