GracieGrace Chime
GracieGrace is a high-end furniture store in City Folk and New Leaf, owned by Gracie, the giraffe fashionista. It is located in the city in City Folk, where it is run by the estranged Able sister, Labelle, and in T&T Emporium in New Leaf, where Gracie herself runs it, as Labelle works at the Able Sisters.

All of the furniture that Gracie sells are many times more expensive than those in Tom Nook's store or the Nookling stores, with many items selling for over 200,000 Bells each. In addition to furniture, Gracie also sells clothing and accessories, which are not as expensive as the furniture (but still priced higher than most clothing items). Villagers are often seen in GracieGrace, where they may complain about the high prices.

GracieGrace's furniture and clothes change seasonally, unlike Tom Nook's or the Able Sisters, which change daily.

Below is a chart showing which series are available during each season.

At the end of each season some of the items in the store may go on sale, while others will be sold out and unable to be purchased. As the season nears its end, the items will be priced lower, however, there will be less of them to buy.

In New Leaf, items can still sell out, but various other items will appear like the wedding cake or furniture from the Card Series. Additionally, the clothing sections will be replaced with similar exclusives. These items are all new to New Leaf and can only be found during the end of season sales. 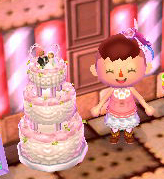 Player with wedding cake on display.

The Card Series on display in a player's house.

The Princess series displayed for sale in GracieGrace

Trying on clothes in GracieGrace

GracieGrace on the third floor in T&T Emporium