“If you look closely at gyroids, you'll see how much personality each of them has.”
― Normal villagers, New Leaf


This article is about the furniture item. For the gyroid that sits near your house in Animal Crossing, see Gyroid (outdoor).

Gyroids (はにわ or ハニワ Haniwa?) are unusual furniture items that appear in most Animal Crossing games. Though mostly furniture items, gyroids also exist as NPCs. In the GCN games, a Gyroid is built outside the player's house; in City Folk, a gyroid by the name of Lloid acts as an auctioneer; and in New Leaf, Lloid collects donations for Public Works Projects and loans tools to players on Tortimer Island. All gyroids, furniture or otherwise, end with an "-oid" suffix.

In games prior to New Horizons, Furniture gyroids are buried, similar to Fossils, and randomly generated each day at 6 AM, though they are only found after rainy or snowy days. There are many gyroids (127 in Wild World), and each family and individual is unique in sound and shape. All are part of families of similar-sounding gyroids, usually with similar names. If one of K.K. Slider's songs is playing on a stereo, or if a player is playing an instrument fast enough, all active gyroids will adjust tempo to match the music. The word "gyroid" comes from the word "gyrate" or "gyre," a term relating to spinning.

There is a limit to how many gyroids can be on at a time in a single room. Turning on an additional gyroid will cause one of the other gyroids to stop automatically. This limit is 14 gyroids in Animal Crossing, 8 gyroids in City Folk, and 4 gyroids in Wild World and New Leaf. Limit in New Horizons is currently unknown, but presumably infinite.

Gyroids were added to New Horizons in the 2.0 update, released on November 5, 2021. They can be obtained by burying and then watering Gyroid Fragments, which will turn into gyroids that can be dug up the next day after they are watered. Gyroid fragments can be obtain through several means, including being found buried in the ground on Kapp'n's mystery island tours.

A room full of different gyroids.

A player digging up a Gyroid in New Leaf. 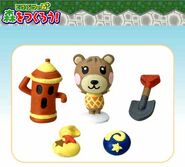 Gyroid in a playset featuring maple

Brewster is known for his liking of gyroids. Gyroids can be seen on the shelves behind him in The Roost. In City Folk, once he warms up to the player, he will offer gyroid storage for free.

In New Leaf, gyroid storage has been eliminated, but Brewster will eventually allow the player to work for him. He will pay the player in coffee and various items from the Café Series, including special Brewster-themed gyroids, called Brewstoids.

Note: Some of these sound files are currently missing. You can help by adding them in.

The name "Alloid" is derived from the word "alloy," which is a substance formed from multiple metals. These gyroids make a steel drum-like sound.

The name "Bovoid" is derived from the word "bovine" due to the gyroid's cow-like mooing.

These gyroids wear bow ties. They make a fast, repetitive sound and dance. They also seem to sound similar to the noise of a low saxophone. They appear to be based on Jazz singers.

Brewstoids are obtained from The Roost in New Leaf for correct orders when working. They make the following sounds: coffee pouring (Tall Brewstoid), placing a coffee cup on a saucer (Brewstoid), and two variations of Brewster chirping (Mini and Mega Brewstoids).

These gyroids make a buzzing noise.

These gyroids say the word "dekkai", which is Japanese for "huge". Their movement is a gesture one would make while describing something large. Each Dekkoid says "dekkai" in a different note, with the Mega Dekkoid having the lowest note and the Mini Dekkoid having the highest one.

These gyroids, as their name suggests, make bell sounds. The Wee Dingloid is the only "Wee" gyroid and is very similar to the Mini Dingloid. Similar to Nebuloid family, the Dingloid family has a squat as well as mega type which sound very similar.

These gyroids are silver and make beeping noises. There are only two sizes. They both have air vents on the back of them.

These gyroids make a drilling sound.

This gyroid makes a "plop, plop, plop" sound, like raindrops. There is only one size. This makes it one of the more rare gyroids.

These gyroids make an echoing noise. Unlike most gyroids, all 3 look different from each other.

These gyroids sound like something being zapped by lightning.

These gyroids make a sound like a man gargling water. Curiously, the Mini variety of this family makes the lowest pitched sound than the standard variety, when usually this is reversed.

These gyroids make a short hitting noise and do not sound like gongs, as the name implies.

These gyroids make a sound like a steam calliope (steam organ).

These gyroids are based off of the word "lament", and make rattling and clanking sounds when they spin. They don't have the same facial features as most gyroids do.

These gyroids make a soothing sound akin to a music box.

These gyroids make a rattling sound.

These gyroids sound like a vibrating beep. The name "Nebuloid" is based off the word "nebula", meaning a cloud of interstellar dust and gas.

These gyroids make an "oom" sound.

These gyroids sound like hitting a hollow tree trunk.

These gyroids make an ominous rattling like a ghost.

These gyroids sound like a person blowing or puffing on a jug.

These gyroids make a clanking noise, like rusted metal.

These gyroids are in rhythm with the music in all games except New Leaf.

These gyroids make a noise similar to that of a spring.

These gyroids, their names deriving from the satellite Sputnik, make the stereotypical noise of a spacecraft drifting through space. These gyroids have metallic bodies, circular eyes, and large, colorful panels.

These gyroids make a squeaking sound like wet sneakers or boots. They also have a sleepy or tired look on their faces.

These gyroids make sounds similar to a guitar. The name comes from the Strum, a basic guitar technique.

These gyroids sound like timpani drums. Their tops resemble bells.

These gyroids make a noise similar to flatulence. They also have pig noses. Curiously, the Mega variety of this family makes the highest pitched sound than the standard variety, when, usually, this is reversed.

These gyroids make a sound like a woman gargling water.

New Horizons has different gyroids to collect than previous games. New Horizons's gyroids do not belong to gyroid families, and so do not have prefixes (such as 'mini' or 'mega'). Their design is also noticeably different, with gyroids often having smaller eyes and different body shapes. The range of sounds gyroids make is different and much wider, with more gyroids making percussive sounds. A gyroid's design is also more influenced to the sounds that they make. Gyroids are customizable, with the player being able to change the color of a given gyroid.