"I caught a horned hercules! Who's the mighty one now?" —New Leaf

The horned hercules (ヘラクレスオオカブト,Herakuresu-ōkabuto?) is a rare bug introduced in Animal Forest e+. Prior to New Leaf, it was known as the hercules beetle. It is the highest priced bug in the games, alongside the Golden Stag Beetle.

In Wild World and City Folk, it can be found on Palm Trees at night, between 5 PM and 8 AM, during the months of July and August, where it sells for an increased 12,000 Bells (up from 11,250 in AFe+). Its shape is compared with the Dynastid Beetle, which is a result of the two sharing the same family.

In Animal Forest e+ it was only found on the Private Island, where it was found on Fruit Trees. In New Leaf it is found both on the island and the mainland (if palm trees are planted on the player's beach).

Due to the addition of the sneaking feature with the net by holding A, this beetle, along with other rare beetles like the Scarab Beetle and the Golden Stag are notoriously skittish. The only way to capture them is to walk at the slowest possible speed. Even walking normally while sneaking will scare these beetles (but note that walking at normal speed during stealth will not scare the other coconut beetles).

Upon donation to the Museum, Blathers the curator will say:

"The Hercules beetle is known as the largest beetle in the world, eh wot? It's those mammoth horns! Yes, the horns are its claim to fame... But inspect them and you'll see they're covered in hair. Blech! Hair horns... Frankly, I can't think of anything more vile..."

After donation, the hercules beetle can be found on the top of the left palm tree, which is in the first room of the bug exhibit.

"Hoo now... The largest dynastid beetle around! I must say, those horns are simply magnificent! Dynastid beetles move fairly slowly, so you're free to view them at your own pace, eh wot? I must heartily endorse any insect that has the decency to move slowly and predictably. Well done!"

"Horned herculeses are the largest beetles in the world, reaching over 17 cm in exceptional cases. Their 2 long horns look pretty, but they're powerful and can hurt a lot of you're pinched by them. The longer horn is covered with short, soft yellow hair, which helps them to sense vibrations. The yellow on their bodies turns black when it's humid, making them difficult to spot on humid evenings."

After donation, the hercules beetle can be found on the second tier of the bug section in the first enclosure, walking on the tree stump towards the back. If a golden stag has been donated to the museum, the pair will use the stump as a beetle sumo ring and take turns flipping each other over.

"The horned hercules is not only known for its tremendous strength, but for its size as well. It can grow up to seven-inches long and has powerful pincers covered in hair that help with gripping! As if this weren't ghastly enough, these behemoth beetles let loose a foul odor that fends off enemies... And offends my sense of smell."

A hercules beetle in New Leaf. 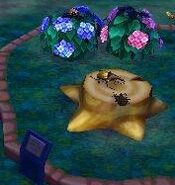 A Horned Hercules fighting a Golden Stag in New Leaf.

A hercules beetle in City Folk.
Add a photo to this gallery

The Hercules Beetle, a name which alternatively applies to a few other Dynastid beetle species in both North

America and Asia, is the most famous and largest of the rhinoceros beetles.

The beetle is native to the rainforests of Central America and South America, as well as the Lesser Antilles. While often considered the worlds largest beetle at a size of around 150-170mm (the end of this scale only achieved by exceptional individuals), it is infact outclassed by two species, both of which are Cerambycids (longhorn beetles), those two being Macrodontia cervicornis and Titanus giganteus. The hercules beetle is considered the strongest creature on earth for its size; it can handle 850 times its own body weight.

One feature that often dismisses its size is its horns; when the horns, which are longer than its body length, are not included. When eye-to-abdomen measuring is used and the horns not in the equation, females can exceed the male's size as they are larger bodied (however they lack the horns, which makes them considerably "smaller" if the male's great horn is included in the measurement).

They eat decaying fruit and the larvae of the beetle spends one to two years tunneling into rotten wood.

Retrieved from "https://animalcrossing.fandom.com/wiki/Horned_hercules?oldid=515298"
Community content is available under CC-BY-SA unless otherwise noted.