“Your enemy is the old you! The new you will get a bit faster every day until you're the best around!”
― Inkwell, New Leaf

Inkwell (スミダクン, Sumidakun?) was a jock octopus villager from the Animal Crossing series, introduced in the Welcome Amiibo update. Inkwell is a villager who will appear in the campground when a certain Splatoon amiibo is scanned in the game. As it seems, he is a big fan of Splatoon.

Along with other RV-exclusive villagers, Inkwell can't be invited to the town if their own house is still present in the town. Once they have packed boxes and left, they may be "adopted" again.

Inkwell is a stylized octopus villager referencing the game Splatoon. Inkwell is a uniformly orange octopus with closely set white eyes, outlined in a thick black line like the characters of the game he's referencing. His appearance is based on that of the squid and octopus forms of Inklings and Octolings respectively. He starts off wearing the black anchor tee.

Inkwell has a jock personality and has a great interest in sports and bodybuilding. Jock villagers are hyperactive and motivated but often come across as egotistical and dense. As a jock villager, Inkwell is very interested in his hobby, and may compete against the player at catching bugs and fish. Jock villagers get along with peppy, cranky and sisterly villagers, but conflict with the laid-back lifestyle of lazy villagers. Snooty villagers may also be difficult to get along with for Inkwell.

Inkwell doesn't have an amiibo card, however he can be scanned into New Leaf by talking to Wisp and scanning in the Inkling Boy, Inkling Girl or Inkling Squid amiibo from the Splatoon series, or the Super Smash Bros. Inkling amiibo.  However, he and the other amiibo exclusive villagers are absent from New Horizons. 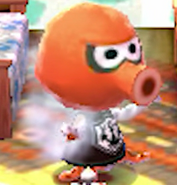 The inside of Inkwell's mobile home.

The exterior of Inkwell's house in New Leaf.

These amiibos can be used to scan in Inkwell in New Leaf.
Add a photo to this gallery

Retrieved from "https://animalcrossing.fandom.com/wiki/Inkwell?oldid=509562"
Community content is available under CC-BY-SA unless otherwise noted.