Start a Wiki
watch 01:22
Who is Isabelle?
Do you like this video?

“Good morning, Mayor!”
― Isabelle, when being talked to by the player when the game is first turned on in the morning in New Leaf.

Isabelle (しずえ Shizue?) is a dog who debuts in New Leaf. She assists the player in whose new role as the town mayor as a secretary and assistant. She is also the twin sister of Digby, who works and stands at the front entrance to the Happy Home Showcase. She also appeared in the spin-off games Happy Home Designer, Amiibo Festival, and Pocket Camp.

Isabelle is friendly, polite, hardworking and eager to help the player in any tasks she can assist with. She is keen to make the town a better place to live in by encouraging the player to do tasks and Public Works Projects throughout the town.

For her, the town she works in is like a family, she knows the ins and outs of it, and has enough influence to make a villager stop undesirable behavior - such as making them change their clothes or stop them from saying an unwanted catchphrase. Otherwise, she seems to prefer to not want to confront them.

On the Valentine's day event in New Leaf, she appears embarrassed in the introductory segment and sends them a chocolate cake. This may be because of her shyness, or a crush on the player which is debatable because the letter sent to the player is about gratitude.

If the player disappears or becomes absent for awhile, Isabelle takes in the workload of the mayor herself until the player returns. In Happy Home Designer, she complains about mayors destroying the town or disappearing[1], making her overwhelmed and stressed with all the work.

She's clumsy and a little bit of an airhead but very intelligent, her twin brother Digby remarks she got engineering degrees at nineteen different universities[2].

In New Horizons, snooty villagers can comment how easy to talk to and wise she is, and express desire in keeping her company. While Smug villagers say that she is the real brains of your island.

Isabelle is a nearsighted bright yellow dog who resembles a Shih Tzu, which her Japanese name, Shizue, is a play on. Her head is also shaped like a bag of bells, hence the English name. She has a happy appearance with rosy cheeks and with a white fur patch on her tail and around her mouth. She wears a green checkered vest with a white top and a red ribbon underneath with a navy blue skirt. During fall and winter, she wears a yellow cardigan instead of a vest, and a black skirt. Her hair is tied up with a red elastic with bells attached which actually jingle as she walks.

She wears different styled clothes on special events that are held around the town; for example, she will wear a flowery shirt during the Fireworks Show and a Santa-style shirt on Toy Day.

Isabelle is an optional character who can move into the village where the player makes houses. She is the head of development in the town, coming to you to help make certain places like the School, the Cafes, the Hospital, and the Department Stores.

Isabelle is a playable character in amiibo Festival, available when the Isabelle amiibo is scanned on the Wii U. Sometimes when the player playing as Isabelle lands on an event square in the Amiibo Festival Board Game mode, a random event specifically related to Isabelle may appear.

Isabelle has 6 unlockable costumes for the game, unlocked through leveling up the Isabelle amiibo:

Isabelle acts as an instructional guide for the player to refresh. She also appears in a few in-game events, as well as having her own furniture theme.

Isabelle will work for Nook Inc. and will appear in-game depending on your progression. If the player progresses enough, a town hall will be built, where Isabelle will serve a similar role as she did in New Leaf. At Resident Services, she will announce the date and time, along with any special events going on at the time. If there are no events to report, she will instead prattle about her personal TV habits or her parents.

Rather than her usual iconic attire, she sports a salmon leaf-themed shirt with a white skirt, and wears brown slip-on shoes. She works with Tom Nook after the Town Hall is built to help the player with the island tune, island flag, island status/appeal, and inappropriate language or clothing from/on villagers.

Capcom revealed outfits based on Isabelle and Mr. Resetti via its Unity blog, and confirmed that Felines' meow sound will be altered accordingly when they are equipped.

Isabelle was confirmed to be an assist trophy character in Super Smash Bros. Wii U/3DS, on the 4th of March, 2014 in the Wii U version (although she is also present in the 3DS version). She was shown again in the Super Smash Bros in the Nintendo Direct on the 8th of April. Later on, she was confirmed that she will help the fighter who summoned her by throwing fruit towards them that can be 'eaten', lowering their percentage but fighters cannot interact with her. An Isabelle Suit for the Mii Gunner was included as part of Smash Bundle #2 as well.

In Taiko no Tatsujin: Atsumete Tomodachi Daisakusen!, Isabelle appears alongside with Tom Nook and Resetti as unlockable content via amiibo cards or figures being activated. Activating any Animal Crossing amiibo product may unlock other features from in-game features to soundtrack from Animal Crossing: New Leaf.

Isabelle was confirmed as a DLC character, along with the Villager, for Mario Kart 8, and has been available since April 23rd, 2015.

Isabelle, alongside K.K. Slider, Tom Nook, and Resetti, appears as a special costume after her respective amiibos are scanned.

On September 13, 2018, Isabelle was confirmed to be a playable fighter in Super Smash Bros. Ultimate for the Nintendo Switch. In her reveal trailer, she is seen working around the mayor's office while the mayor is out camping and fighting in Smash. She then gets a letter from Pete and is shocked when it ends up being an invitation for Smash. Her trailer ends asking for the viewers to cheer her on, which many did. She is a Semi-Clone of Villager, who is also a confirmed character in Ultimate.

Advice for Living in Town

In New Leaf, asking Isabelle for advice on living in the town grants sub-quests the player can do. She will repeat advice several times, even if finished. Apart from listening to her advice, the player is asked to buy a shovel, collect one seashell and catch either three bugs or fish and eventually receives a basket of non-native fruit and a watering can. If the player can't find a shovel and talks with Isabelle, she will give the player a shovel. She will also provide the player with either a net or a fishing pole in the same manner after asking the player to catch bugs or fish.

“Is there something I can help you with today?”
― Isabelle, offering the player assistance.

“Oh my! Has my clock gotten out of whack? Then please tell me what the correct time is!”
― Isabelle, when asked to set the clock.

“What?! Sorry, but my ears are just too fluffy and muffly, I guess. Please tell me once more.”
― Isabelle, after being told that the changed clock settings are incorrect.

“I must say, I'm a fan of K.K. Slider myself...”
― Isabelle at the introduction spotlight, after Club LOL has been built.

, she will have the following to say:

"Hello, this is Isabelle. Player?!
You're so funny! You're practically right in front of me right now, you know!
So, um... What's on your mind?
A visit to the campsite? That sounds like loads of fun...
But...I've got a to-do list a mile long. Do I even have a sleeping bag? No, I'm so sorry, but I really can't go.
It's so nice of you to think of me, though. Some other time, maybe. Thank you!"

“They want me in Smash?! (Isabelle turns over a new leaf!)”
― Isabelle, Isabelle being revealed in the 9/13/18 Nintendo Direct.

Isabelle preparing to show the mayor a list of requested Public Works Projects.

Isabelle hosting the completion ceremony for a suspension bridge.

Isabelle following the player as they build a circle topiary.

Giving a seashell to Isabelle.

Isabelle is happy with her seashell gift.

Isabelle asking where to put the project.

Isabelle following in the rain.

Isabelle after returning a seashell.

Isabelle informing the player about the ceremony at the train station.

Example of Isabelle hosting a ceremony.

Isabelle thinking of an estimated time of completion.

The Player falls into a pitfall and Isabelle is shocked.

Isabelle asking for a coffee at the Cafe.

Talking to another Isabelle from another town.

Isabelle at the fountain completion ceremony.

Isabelle telling the player to slow down.

Isabelle at the spotlight during start up preparations [Animated GIF].

Isabelle telling the player what fruit her town is famous for.

The player complaining about Monique's catchphrase to Isabelle.

Outside of Isabelle's RV

Isabelle's reaction to you refusing to attend a ceremony.
Add a photo to this gallery

Isabelle in her Summer Solstice outfit.

Isabelle in her Labor Day outfit.

Isabelle in her Fireworks Show outfit.

Isabelle in her spring and summer outfit

Isabelle in a kimono.

Isabelle in her fall and winter outfit.

Isabelle in her Nature Day outfit.

Isabelle in her Autumn Moon outfit.

Photo board for Tsukimi. Note that Isabelle is wearing a Bunny Shirt.

Isabelle in her Explorer's Day outfit.

Isabelle in her Winter Solstice outfit

Refusing to attend a ceremony.
Add a photo to this gallery

Isabelle In Her Initial Outfit

Isabelle In a Valentines day
Add a photo to this gallery

A model of Isabelle and the Town Hall come bundled with the New Leaf Limited Edition 3DS XL if pre-ordered. 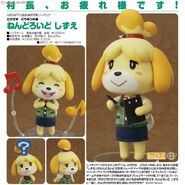 A Nendoroid of Isabelle has been released by the Good Smile Company.

A plush of Isabelle from Japan. 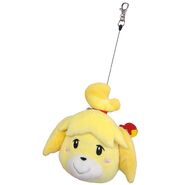 An official pass case bag adorned with her face. 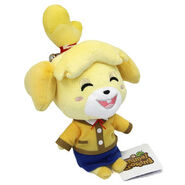 Isabelle in this 15 anniversary wallpaper. 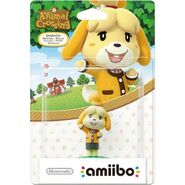 Isabelle amiibo for Super Smash Bros. Ultimate
Add a photo to this gallery

Isabelle appears in this piece of artwork for the new Smash Bros. games. 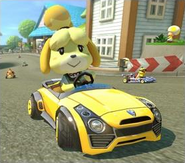 Isabelle's Artwork for Super Smash Bros. Ultimate
Add a photo to this gallery

Isabelle's PC Icon
Add a photo to this gallery

Retrieved from "https://animalcrossing.fandom.com/wiki/Isabelle?oldid=459662"
Community content is available under CC-BY-SA unless otherwise noted.