The Island Designer is an app the player can use to add paths or change cliffs and lakes/rivers in New Horizons. When first unlocked, you only have access to dirt and grass pathing, but more can be unlocked from the Nook Stop with Nook Miles. This app assists with any type of landscaping ("terraforming").

The app also offers a cleanup service, which cleans up placed items, fencing and trees around you when you're "stuck in a pickle".

It is unlocked in the NookPhone after K.K. Slider's first performance, when Tom Nook is outside of your house.

This can be purchased from the Nook Stop for 6000 Nook Miles after Island Designer is unlocked.

With the Waterscaping tool equipped, you can press A on a piece of land to turn it into water, pressing A again on tile of water will turn it back into land. Once you have at least a 2x2 square of water, you can round the corners by filling them in with land then pressing A again to take off the corner (pressing A a second time will remove the corner of land).

The below information is based on using Fish bait to spawn - it is unconfirmed if this can force unnatural spawns.

To create a pond that can spawn fish, each side needs to be at least 3x3. The total area is not a factor as a 5x2 pond will create 10 water tiles (1 more than a 3x3) but no fish will be able to spawn.

To create a pond at the top of a waterfall that can spawn fish, it needs to be at least 3x4 as the row the waterfall occupies is not a spawnable area.

The edges can, again, be rounded without affecting spawning.

Similar to a pond, a river needs to be a minimum of 3 tiles wide to be able to spawn fish and starts from a minimum of 10 tiles long.

The exceptions to this are when a pond is adjacent to moving water:

A pond will convert into a river when the longest side is greater than the shortest side + 6:

This can be purchased from the Nook Stop for 6000 Nook Miles after the Island Designer App is unlocked.

Cliffs must be stepped like a pyramid - you cannot place another cliff right at the edge of the first. This means that the whole top row of grass on an island can only go one high.

When the player walks over path the sound of their footsteps changes to match the material, footprints are also left on the sand and dark dirt paths.

There is no Nook Miles achievement for collecting all the paths.

Paths cannot be placed on the beach, the small slope leading to the beach or underneath houses/plaza (except the stairs). A path will not fill an entire tile unless it is surrounded by the same type of path, there will be a grass separator.

If you create a right-angle with your path, you can re-apply the same path to the corner to get a rounded edge.

When the Island Designer app is first unlocked, you will have access to the following paths immediately, for free:

The grass you can lay down through the Island Designer app is indistinguishable from the default grass.

All of the paths below can be purchased from the Nook Stop for 2000 Nook Miles each (except the custom design path which is 2300 miles) for a total of 16300 miles.

The brick path is a brighter color and in a different pattern than the brick at the Town Plaza. 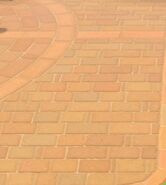 You are able to plant coconuts on a sand path, allowing you to grow and harvest coconuts anywhere on your island.

This allows you to place a custom design on the floor - not including Pro designs.

Unlike the other paths, these can be removed by pressing Y on them and can be placed on-top of an existing path. The only difference between using this and "Display on Ground" option in the Custom Designs app is that you can apply a single pattern repeatedly much faster.