NL
Island tours are mini-games that can be played to earn medals while on Tortimer Island, appearing in New Leaf.

There are a wide number of different tours available and they each come in three different difficulties. At first, only the easy tours can be selected, and by earning 50 medals, medium tours can be unlocked. Earning approximately 120 medals will then unlock the hard tours. A selection of 12 tours will be available from Leilani at any point in time and they change randomly every day at 12 AM. Course tours (tours with easy, official, and elite variants) will always appear as a set.

Once a tour is selected, all players on the island must be seated to begin. In Club Tortimer, only the player who initiated the tour has to be seated before the tour begins, and non-seated players will be left behind. The player can choose to play a game with other visiting players, or by themselves. Medals are earned from tour objectives and bonus medals are awarded for bronze, silver, or gold achievements in each tour.

In multiplayer, the required score for a game's medal milestone is often multiplied by the number of participating players. Additionally, in a select few games, bonus medals are awarded to each player depending on how much they contributed and the difficulty of the tour.

Up to four tour categories are available per day, from the following: Balloon-Hunt, Bug Catching, Diving, Fishing, Gardening, Fossil-Hunting, Labyrinth, Ore-Hunting, Hammering, Item-Matching, Hide-and-Seek, Scavenger Hunting. Each of these four available tour categories will pick one each of their respective subcategory(s).

There are three difficulties for each island tour: Easy, Official, and Elite. Initially, only Easy is unlocked, but the second tier can also be unlocked too if the player has earned at least 5 gold medals of any category, or 15 with the third tier.

At the start of the tour, the slingshot will be automatically equipped. The aim of the Balloon-Hunt is to shoot down as many balloons floating in the air as possible. On the lower screen of the Nintendo 3DS will be a wind indicator which will indicate the direction the balloons will be flying in, as well as the location of a balloon. Regular balloons are worth one point and bunny balloons are worth three points.

During multiplayer, the balloons on the map are multiplied by the number of players participating. Each player will be allocated a color and can only pop balloons of their associated color.

Shooting at a balloon

Falling into a pitfall trap during the Official Balloon-Hunt 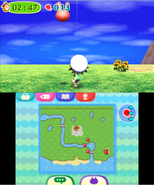 Shooting at a bunny balloon, plus a map of the balloons below

The aim of the tour is to find as many bugs specified by Tortimer on the Island. A rental net is automatically given for use in this tour. Some tours require specific criteria, such as catching high-selling bugs or only specific insects.

The aim of the diving tour is to catch as many sea creatures as the player can that are found at the bottom of the sea by diving to catch them. The island that this takes place on will have water on all four sides, so there is plenty of sea to swim around in.

The goal of this tour is to catch the most fish before time runs out. The fishing tours comes in several varieties with different parameters and gameplay. In tours in which the player is restricted to catching ocean fish only, the tour will take place on an island that has ocean on all four sides, and rivers will not be present.

The general aim of this tour is to plant as many flowers of the specified type as possible in the area near Tortimer. The game ends after 25 flowers have been planted.

The objective of this tour is to dig up and find particular types of fossil. There are a pair of houses on the map. The one on the left is the "sample" house. It displays the required types and orientations of fossils the player will need. The house on the right is empty. The player must sort through the fossils they dug up for identical fossils and arrange them in the empty house exactly how they appear in the sample house.

Digging up a fossil

Completing a fossil hunt after collecting and rearranging all correct fossils

When selecting this tour, a maze will be set up on the island made entirely out of bushes. Inside the maze there will be certain types of fruit which will be required to be collected in order to finish the tour. The fruit collected must be the specific fruit Tortimer requested, and the amount must be the exact amount requested by Tortimer. If the amount is less or exceeds the number requested, the entry will not be accepted.

In this tour, players are situated in a randomly generated, unoccupied town filled with an abundance of rocks. The aim of the game is to earn as many points as possible by using the automatically equipped shovel to find breakable rocks and collect gemstones. Regular gemstones are worth one point, with one announced ore type worth 3 points. Later levels introduce a rarer, 10-point mystery ore.

This section is empty. You can help by expanding it.

Each player is equipped with a hammer. The aim of the hammer tour is to chase around a Cornimer remote control toy which must be hit with the hammer as many times as possible before the time runs out. When the toy reaches an obstacle it will turn in a random direction. The toy will occasionally flip over, leaving it vulnerable to a barrage of easy hits.

This tour is a memory game which requires locating a pair of items buried in the ground. Upon starting, a shovel will automatically be equipped for use during the game. When digging up an item, the corresponding pair must be found as well. If the next dug up item does not match the first, it will automatically be buried again until the matching item is found.

Prompting player if they want to bury an item

Finishing the game with the final pair

Just like the game that was introduced in City Folk, the aim of hide and seek is to find four villagers hiding on the Island. They may be hiding behind trees or fixtures. Villagers will not hide on the beach nor inside houses.

During multiplayer, the players have one less minute to complete the tour for each additional player participating in the tour.

Earning a gold medal on the Easy Hide-and-Seek Tour

This is a scavenger hunt game for finding certain types of furniture. The goal is to enter houses and pick up the furniture listed, then go back to Tortimer to deliver it. The targeted furniture is listed in the checklist located in the inventory menu. The checklist is also shared among the players, checking off the furniture on all of their checklists each time the correct furniture is delivered. The game is over if the time runs out or if all listed items are found. Furniture cannot be taken out of this tour.

In multiplayer, each player is given a list of three items to find. A house can only be occupied by one player at a time. The game ends as soon as the last player reports back to Tortimer.

Player in a house full of furniture

Example checklist in a scavenger hunt

Medals are a form of currency used on the island in New Leaf. The player will earn medals by playing various tours.

The following items are available for sale on the island:

The following items are available for sale only through Club Tortimer: