This article is about the pumpkin celebrated on Halloween. For the smug cat villager, see Raymond.

Jack (パンプキング, Panpukingu?, Pumpking), or the self-proclaimed Czar of Halloween, is a character from the Animal Crossing series who is a specter. He appears once a year for Halloween, from 6:00 PM until 1:00 AM the following day. He distributes spooky furniture, which can only be obtained through him. If you don't give him candy, he pulls a trick on you, which includes: taking your offered item; turning an inventory item into a Jack-in-the-Box; replacing your top with a Patched Shirt or Moldy Shirt; giving you, or replacing your hat and/or accessory with, a Pumpkin Head helmet. The latter two require an empty inventory. He wears a pumpkin on his head which, during Halloween, makes him indistinguishable from other villagers who are also dressed like that and will also ask for candy. Jack, like all other holiday-related characters, was absent from Wild World, as was Halloween and candy.

Jack wears an orange pumpkin with hollowed out eyes, circle nose, and a jagged mouth smile, as his head. He wears a dark blue robe with lighter trim lines on his arms and the bottom of the robe. He wears black gloves on his hands and black boots on his feet.

In New Leaf, other villagers will try to dress like Jack, but he is distinguishable by his short height and has an orange pumpkin.

In Animal Crossing, he will be somewhere in town during Halloween. Unlike the other villagers, who wear the same clothing as him, he will not chase you. This is the same for Mayor Tortimer, who on the night will give the player a model of Katrina's tent. Upon talking to Jack, he will give the player an item of spooky furniture in exchange for candy. Doing this throughout the event will complete the set.

Jack does not feature in Wild World, however, it could be thought that the pumpkin that appears in the Jack-in-the-box item could be a reference to Jack.

Jack returns in City Folk with Halloween and candy. He was announced on the Japanese website for City Folk, along with other characters. His role remains the same as in Animal Crossing, and he now calls himself the Czar of Halloween. He sends a letter out to players earlier in the month, warning of his arrival, and telling them to have candy ready. Nook's store starts selling candy on the 1st of October.


In New Leaf, Jack reprises his role from previous games. From October 1st to the 8th, Jack will roam around the town until spoken to. Once interacted with, he will ask the player if they want to be his servant. During this time, no other special characters such as Redd, except Joan, will appear and the player won't be allowed to work at The Roost. Here, he is much more identifiable, as even though he chases the player like other villagers, impostors' costumes have noticeable differences from his own (i.e. triangular eyes, pink skin, or taller bodies). He describes candy and lollipops as his favorite treats, and gives out creepy objects and spooky furniture, the latter of which is now purchasable at stores. When the player gives him lollipops, he will always reward them with a creepy object, though there is a small chance of still receiving them while giving him candy. However, if the player doesn't give him candy, he pulls a trick on them, which includes taking their items, and giving them stitched clothing.

Jack gives a piece of furniture every time the player gives him candy. All the furniture pieces look like pumpkins or Jack O'Lanterns. They are orange and, like all holiday-exclusive furniture sets, score very highly with the Happy Room Academy.

Jack O'Lanterns, Jack-in-the-Boxes, and Ragged Shirts are arguably considered part of the Spooky Series. There is also a Spooky Shirt, which is not given to the player by Jack, but by Gracie or Wisp.

Jack, as he appeared in Animal Crossing.
Add a photo to this gallery

Jack as he appeared in City Folk.

Jack speaking to the player.

The player talking to Jack after finding him. 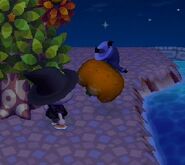 Jack as he disappears. 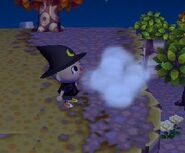 Jack disappears into a cloud of smoke.
Add a photo to this gallery

Jack introducing himself to the player.

Jack disappering into the night after an encounter with the player.

The player giving Jack a Lollipop.

The player giving Jack a Lollipop.

Jack's RV inNew Leaf
Add a photo to this gallery

Jack's PC Icon
Add a photo to this gallery

Retrieved from "https://animalcrossing.fandom.com/wiki/Jack?oldid=455018"
Community content is available under CC-BY-SA unless otherwise noted.