This article is about a type of flora. For the lazy bird villager, see Jacob.

When the town is environmentally perfect

Jacob's ladders (lilies of the valley in Happy Home Designer and New Horizons) are a unique type of flower in the Animal Crossing series. They only spawn when the player's town is in perfect condition. Jacob's Ladders have appeared since Animal Forest e+. Receiving the golden watering can when the player's town is in perfect condition for 15 days straight is generally a good indicator of when the plant may appear. Jacob's Ladders usually spawn near cliffs, making them easy to find. In New Horizons, lilies of the valley only grow on islands with a 5-star island evaluation, often appearing near the tops of cliffs one appearing per week.

This flower doesn't breed when planted next to other Jacob's Ladders or other flowers, though it does increase the chance of breeding other flowers when planted next to them (but not in New Horizons). In the Japanese version of the game, the flower is called スズラン (suzuran), a name that translates to "Jacob's ladder" given to the lily of the valley. This is likely the flower it is meant to represent, rather than a species in the Polemonium genus, which are often called Jacob's ladder. In New Horizons, they can be run over without damage and can't be picked (you can move the entire plant with a shovel, but you can't wear it).

The real-life flower known as Jacob's ladder is a medicinal flower that is more commonly purple and has light green leaflets. The clusters of flowers bloom in spring and summer. The lily of the valley is a poisonous plant that grows in temperate areas of the northern hemisphere including Europe, eastern Asia, and parts of the eastern USA. The drooping, bell-shaped flowers have six white petals and bloom in spring. Rarer varieties have pink petals. Later in the year, they are replaced by bright red berries with a yellow/orange middle. The lily of the valley is a popular plant for gardening because of its sweet fragrance and quick land covering abilities.

An orchard of Jacob's ladders in a player's town in City Folk.

A player wearing a Jacob's ladder in New Leaf.

One of the two Jacob's ladders at the Campground in New Leaf.

Both of the Jacob’s ladders at the Campground in New Leaf. 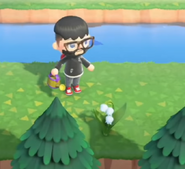